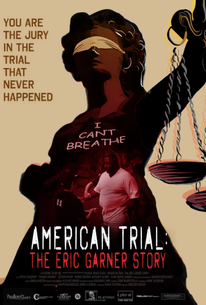 Alan M. Dershowitz
as Self

Though there's no doubt where his sympathies lie, first-time feature director Messinger is dispassionate in the courtroom, allowing both sides to present reasoned arguments.

A righteous cause supported by a very bad idea, but a bad idea (a docu-drama) executed about as well as could be expected.

"American Trial: The Eric Garner Story" could have been something special. The idea has spectacular merits. It's just in the execution that things fall flat.

American Trial and its portrayal of the broken American legal system seems so real that it doesn't just convey Snipe Garner's helplessness but also amplifies it.

Unfortunately this is not a film many will sit all the way through, the story and message being lost to audiences with less patience and attention span that the filmmakers were intending.

Producer/writer/director Roee Messinger has created an astonishing film, a video that contemplates what if. It tackles themes of race, police brutality, stop and frisk and the plusses and minuses of our judicial system.

There are no featured reviews for American Trial: The Eric Garner Story at this time.