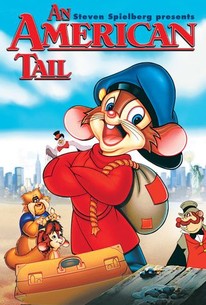 An American Tail is a beautifully rendered animated flim that tells an overly familiar story in terms children can easily understand. Fievel Mousekewitz and his family of Russian-Jewish mice escape from their homeland in the late 1800s, boarding a boat headed toward America to evade the Czarist rule of the Russian cats. Fievel, however, is separated from his family upon his arrival in New York City, and he discovers to his horror that there are cats in America too (his father said there weren't). Fievel meets his share of friendly and hostile mice, and he eventually befriends a cat as well. Former Disney animator Don Bluth co-produced and directed this often heartwarming yarn, the first animated feature presented by Steven Spielberg, and it has its charms despite a number of cliché situations. ~ Don Kaye, Rovi

Will Ryan
as Digit

Critic Reviews for An American Tail

Cartoons with ambitions even this noble are as rare as Steven Spielberg films that lose money, but every character and every situation presented herein have been seen a thousand times before.

For all its state-of-the-art animation techniques, Spielberg's production remains resolutely conservative: visually it's virtually indistinguishable from Walt at his wimpiest.

The movie has such vague ethnic grounds, however, that only a few children will understand or care that the Mousekewitzes are Jewish. And few of those are likely to be entertained by such a tragic, gloomy story.

It may be that the truly American tale here is the spectacle of an artist squandering his awesome gifts on the way to becoming a Hollywood institution.

I love the music, the animation is beautiful throughout.

An intimate and entertaining animated epic...

Its sappiness is unmissably sincere, and such aching, embarrassing sincerity is never an evil thing in a movie.

There's nothing particularly special about An American Tail, save for Bluth's slick animation.

The story is moving, and the animation includes some powerful images, although some of the early scenes depicting the suffering of the mice in Russia may be too frightening for younger viewers.

Audience Reviews for An American Tail

A tale of immigration told through a cartoon world. This plays on a few Classic tales and re-watching the film at the age I am now you can really pick up on metaphors in relation to the human world. Despite all of the modern effects such as CGI, this film still works as a timeless piece of animation.

I think I missed out on the appeal of this film because I never saw it when I was younger. I could never get over the Russian accents.

good songs, but its just so dang depressing

Don Bluths An American Tail has its haters and lovers. A quirky movie with some memorable songs.