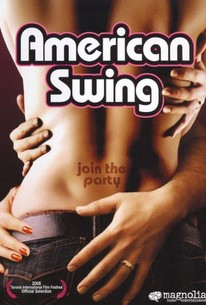 Critics Consensus: While American Swing covers a fascinating subject, its amateur documentary treatment does it no favors.

Critics Consensus: While American Swing covers a fascinating subject, its amateur documentary treatment does it no favors.

Critic Consensus: While American Swing covers a fascinating subject, its amateur documentary treatment does it no favors.

Filmmakers Mathew Kaufman and Jon Hart explore the last gasp of the sexual revolution with this profile of Plato's Retreat -- New York City's most notorious, 1970s-era sex club. The year was 1977: the city was in the suffocating grip of a heat wave, nerves were rattled due to the energy crisis, and the social unrest was growing. But when the sun went down over the city, the nightlife flourished. The discos were packed, cocaine was all the rage at Studio 54, and over at CBGB the punks were smashing it up. Inspired by the open sexuality in gay clubs all across town, Larry Levenson hatched the idea to open a club where people could have sex freely, without shame or threat of lawful consequences. On the surface Levenson appeared to be just your average family man, but by night he would leave his wife at home to live it up at local swingers clubs. It was with the help of some particularly shady investors, as well as his girlfriend Mary and a series of steamy public-access commercials, that Levenson made his dreams of opening an extravagant, heterosexual sex club a reality. There were no inhibitions at Plato's Retreat, as highlighted by the numerous vintage clips showing the swingers paradise in its heyday. But while the city ultimately failed in their efforts to pass ordinances that would close Plato's Retreat, the club flourished until the closing of its doors on New Year's Eve, 1985, an erotic casualty of the growing AIDS crisis. Interviews with Melvin Van Peebles, Ed Koch, as well as other journalists, celebrities, and actual club employees paint a vivid image of the carefree era before sexuality was a matter of life and death. ~ Jason Buchanan, Rovi

Critics Consensus: Monsters vs. Aliens Is A Blast

The film treats Levenson's rapid descent as if someone had turned on the lights at a sex party: scurrying away with pity and irritation that the good times had to end.

American Swing doesn't have a particularly well-defined point of view, but it is a succinct, entertaining and valuable record of a time that in some ways now seems as remote as the Roaring '20s.

In the end, the impression isn't that much different from one given by the club's own hairy habitues -- lots of sleazy charm, pounds of gold chains and a smarmy shallowness that goes very, very deep.

Although American Swing pointedly goes out of its way to include positive testimonials from several women who patronized the club, it leaves you feeling queasy.

Directors Jon Hart and Matthew Kaufman don't delve deeply enough into the psyche of club founder Larry Levenson or the culture he exploited. But they do present an entertaining snapshot of his brief reign as New York's self-appointed King of Swing.

American Swing could use the flair of similar portraits of disco-era debauchery like Boogie Nights or Inside Deep Throat, but it's even-handed in capturing the operation's ambition and hubris. Just don't bring an appetite.

There are lots of interesting tidbits here, but I can't help but feel that the real meat of the story has yet to be explored.

Certainly, the sex was exciting, as well as controversial. But Plato's Retreat also represented an effort to think through the mores behind monogamy, to challenge assumptions and imagine an alternative.

A scary reminder of the potentially-disastrous physical and emotional consequences of indiscriminate mating.

The pearls of wisdom are best extracted from the minds of those who stood on the front line, people who walked into the seminal fluid line of fire and lived to tell the tale.

There's glossy surface engagement as an artifact snapshot of the sexual revolution, but everything about American Swing is only thumbnail-deep; it doesn't have, ahem, the rigorous thrust necessary to leave a lasting impression.

One of the complaints over the years about documentaries is how very unsexy they usually are. To contradict that complaint, along comes "American Swing" which is about the rise and fall of Larry Levenson who owned the legendary swinger's club Plato's Retreat in New York City. While it is implied that he was just there to have sex with everything that moved, at least he was open about his desires without shame, even going on any number of talk shows including Phil Donahue. The documentary is liberally illustrated with explicit photographs and videos taken inside the club, which while interesting from a historical angle, do not improve on anything we could have imagined ourselves. Of the talking heads, there are adult entertainment veterans including Ron Jeremy, Dian Hanson and Annie Sprinkle but the movie makes no connection between the pornography industry and swinging. On a wider basis, the documentary partially successfully fits the club in a wider discussion of the sexual revolution, especially related to suburban couples, as Plato's Retreat allowed suburbanites from Long Island and New Jersey(definitely NOT my parents, by the way) to escape into anonymity where their neighbors would be unaware what they were up to(unless they were there, too). However, the film fails to mention the second club on 34th Street was just a short walk away from Penn Station. The most liberating part for the participants was sometimes not the sex but the acceptance of all body types. For women, it could be a mixed bag, either a continuation of patriarchal attitudes or a free exploration of their own desires. Like all parties, the one at Plato's Retreat had to end, too. Where once the worst that could happen would be a bad case of crabs, in the 80's it was AIDS and the end of an era.

Nothing groundbreaking, but it was entertaining. Might've been better if it was focused on "swinging" in general rather than on one man.

Highly entertaining yet quite sad expose of the infamous hetero sex club in 70s/80s NYC. I enjoyed the juxtaposition of lush score against pornographic images, which added some emotional heft to the proceedings, and some of the interviews are highly entertaining. It's a wonderful time capsule of a time no so long ago where clearly waxing was not an option oft-explored. Really does make you want to pull a LOT of hairs out of a LOT of genital areas!