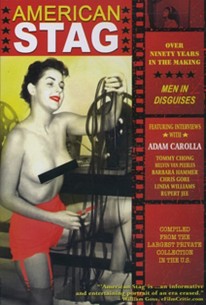 Adam Carolla, Tommy Chong, Melvin Van Peebles, Barbara Hammer, Chris Gore, Linda Williams, and others discuss the history of the American "stag film" in his documentary from Bazaar Bizarre director Benjamin Meade. Up until the 1960s, the vast majority of American pornographic films were anonymously produced black and white shorts, that were frequently referred to as "blue movies" or "smokers" due to the fact that they were generally screened in cramped, smoke-filled rooms. While the early stag films were shot on 35mm film, the advent of 8mm and 16mm consumer stock opened the floodgates by making the format more accessible and allowing approximately 1000 of these films to be produced between 1915 and 1968. Featuring film clips from the largest private "stag film" collection in North America, American Stag explores the history of the "blue movie" not for the titillating subject manner or sub-par production values, but for the important role it played in helping to both shape and reflect American pop culture.

There are no critic reviews yet for American Stag. Keep checking Rotten Tomatoes for updates!

There are no featured reviews for American Stag at this time.