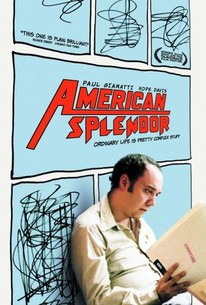 Critics Consensus: Exhilarating both stylistically and for its entertaining, moving portrayal of an everyman, American Splendor is a portrait of a true underground original.

Critics Consensus: Exhilarating both stylistically and for its entertaining, moving portrayal of an everyman, American Splendor is a portrait of a true underground original.

Critic Consensus: Exhilarating both stylistically and for its entertaining, moving portrayal of an everyman, American Splendor is a portrait of a true underground original.

Harvey Pekar is file clerk at the local VA hospital. His interactions with his co-workers offer some relief from the monotony, and their discussions encompass everything from music to the decline of American culture to new flavors of jellybeans and life itself. At home, Harvey fills his days with reading, writing and listening to jazz. His apartment is filled with thousands of books and LPs, and he regularly scours Cleveland's thrift stores and garage sales for more, savoring the rare joy of a 25-cent find. It is at one of these junk sales that Harvey meets Robert Crumb, a greeting card artist and music enthusiast. When, years later, Crumb finds international success for his underground comics, the idea that comic books can be a valid art form for adults inspires Harvey to write his own brand of comic book. An admirer of naturalist writers like Theodore Dreiser, Harvey makes his "American Splendor" a truthful, unsentimental record of his working-class life, a warts-and-all self portrait. First published in 1976, the comic earns Harvey cult fame throughout the 1980s and eventually leads him to the sardonic Joyce Barber, a partner in a Delaware comic book store who end ups being Harvey's true soul mate as they experience the bizarre byproducts of Harvey's cult celebrity stature.

Nick Baxter
as Mattress Guy No. 1

Allen Branstein
as Mattress Guy No. 2

Robert Pulcini
as Bob the Director

Bianca A. Santos
as Counter Girl

James McCaffrey
as Fred
View All

I can't imagine how the filmmakers went about it, let alone pulled the whole thing off, but their film comes together in unpredictable and remarkably pleasurable ways.

The rare artist biopic that goes beyond the dull march of events and actually illuminates the creative process.

A glorious rebuke to all this summer's recycled, effects-ridden, laboriously "fun" Hollywood disappointments piled along the wayside like so many crashed cars.

We're constantly kept on our toes regarding issues of representation while Pekar's sour but indefatigible working-class skepticism carries us along.

It would be a mistake to regard American Splendor as an anthem for the common man. It is the uncommon that is being celebrated here.

Played to perfection by Paul Giamatti, Pekar defies the categories of hero, villain, or even anti-hero. He simply exists, an ordinary man trying to make the best of a largely disappointing life.

What makes the film special throughout is the way its form mirrors its subject matter. On every level, it's a film about unlikely marriages.

Like Ghost World before it, Pulcini and Berman have taken an unconventional comic and given it a cinematic make-over.

Underneath all this schtick pulses a restrained, pensive take on how the terrific loneliness of the modern human condition can be ameliorated through its narration. Misery loves company, in other words, especially if it's comically described.

Channels Pekar's vision of art and life as twinned struggles. One of cinema's great first-date sequences is here. We're splendidly shown how a lower-class nine-to-fiver has his own creative selves and richly expressive life.

Harvey Pekar is the only person who could have a bio-pic like this. Melding together documentary filmmaking and narrative filmmaking, the director team of Shari Springer Berman and Robert Pulcini bring Pekar to life, but also engaged Pekar. Through interviews with him and his wife, Joyce, we learn about the reality of his scourges, how he's still working for the same company, how much he loves his friends, his family, how he was treated by the Letterman show, and how he feels about comics, life, and love. Pekar is fascinating, while also being mundane, and that's also the rarity and greatness of "American Splendor" as a comic. Giamatti gives a top notch performance as the formidable curmudgeon, and Hope Davis is equally interesting as his anachronistic wife. This film has the right style, perspective, and humor, when dealing with the real life of one of America's best and most underappreciated graphic novel authors. It may not be for everyone's taste, because it is highly stylized, but it seems to fit with the less than glamorous life of Pekar, and that's only fitting.

'American Splendor'. What a brilliantly ambitious film, with its merging of documentary and adapted comic screenplay! Surely up there with the best comic book to film adaptations of all time. Harvey Pekar is a wonderfully rich character, and I kept watching it thinking of him as a blend of Art Spiegelman and Larry David; Paul Giamatti is perfectly cast.

Its awesome, fun, and charming. Ordinary life is pretty complex stuff. This film exploits that and creates a truly original film.

Real Harvey: If you think reading comics about your life seems strange, try watching a play about it. God only knows how I'll feel when I see this movie.  "Ordinary life is pretty complex stuff." American Splendor is a very inventive and original biography. The movie jumps through time with its character, Harvey Peckar, a struggling comic writer who has an everyday job as well. He decides to start writing his own comics about everyday life and what he encounters in the world and then he has friends do the illustrations for him. He gets famous, he gets on Letterman, but it isn't something that is going to make him rich.  The movie is narrated by the real Harvey Peckar and we are shown glimpses of him being interviewed. The man reminds me of a Woody Allen character, and if Allen was a comic book writer, the two would pretty much be the same. The film gets a little overly artsy at times, but I still managed to really like its creativity. I love independent films like this one that really think outside the box. Obviously the movie is going to be well acted when Paul Giammati is in the lead role. He makes Peckar his own and gives a great performance. Giammati has a knack for roles like this and he never disappoints. I've never read a Peckar comic, but this movie definitely has gotten me interested in his work. American Splendor is a really good biography and a breath of fresh air when it comes to watching all of the typical biographies that come out all the time.