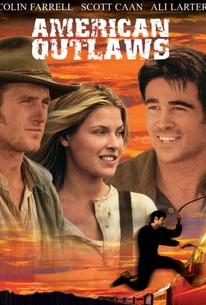 This loosely fact-based oater attempts to mimic the youthful heartthrobs in Western garb formula of Young Guns (1988), as well as the cheeky humor and some plot elements of Butch Cassidy and the Sundance Kid (1969). Colin Farrell stars as Jesse James, who returns home from the Civil War to his small hometown to find that a crooked railroad baron (Harris Yulin) has been illegally forcing the residents from the homesteads to make way for a new rail line. Enraged, James leads a band of outlaws including his brother Frank (Gabriel Macht), Cole Younger (Scott Caan), and Younger's brothers Bob (Will McCormack) and Jim (Gregory Smith) on a criminal spree of bank robbing. Although their Robin Hood-style tactics soon make them local heroes, the James-Younger gang members find themselves pursued by the dogged Allan Pinkerton (Timothy Dalton), the world's first "private eye." Along the way, Jesse also finds romance with Zee Mimms (Ali Larter), the daughter of a local doctor (Ronny Cox).

Will McCormack
as Bob Younger

The kind of film that will have you throwing your popcorn at the screen in disgust.

A big yawn that only reminds us why movie westerns are six feet under and not likely to make a comeback.

The bizarre result of another in a long line of westerns tailored for rising actors, who no one really takes seriously in such projects.

The movie's presumption of ignorance on the audience's part is monumental.

The blandification of the puppy-stud Western reaches its nadir.

Picture 1860s Missouri as Ft. Lauderdale during Spring Break and you've got the idea.

Let's cast a lot of cute boys as the James/Younger gang. In between hold-ups, they can bicker about who's the cutest and, oh yeah, they can take their shirts off a lot.

Never mind that it's already been done before and better; it's never been done this pretty.

For the most part it's First Knight Way Out West all the way.

A run of the mill western adventure that was fun but a bit too corny.

Pretty good action keeps this one afloat. It's like a young Guns for the new generation but just not as good.