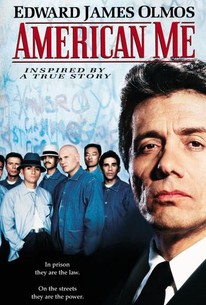 Edward J. Olmos made his directorial bow with the powerhouse crime saga American Me. Olmos stars as street-gang leader Santana, who during his 18 years in Folsom Prison rules over all the drug-and-murder activities behind bars. Upon his release, Santana goes back to his old neighborhood, intending to lead a peaceful, crime-free life. But his old gang buddies force him back into his old habits. The omniprescene of the "Mexican Mafia" in the southwest is sufficient to make this film a daunting, demoralizing experience. Upon its release, American Me received a lot of press play due to the fact that Olmos shot his Folsom sequences on location, using actual prisoners as extras and bit players.

Daniel A. Haro
as Huero

Steven Cisneros
as Chivo
View All

Critic Reviews for American Me

It knows these worlds. The language, the clothes, the attitudes, are all shown with the understated conviction of a director who is sure of his material.

Throughout, Olmos dominates the film with an impassive, yet inwardly tormented performance as he wears the implacable mask of power.

The film's intent to serve as a cautionary tale is admirable, but Olmos acts better than he directs, and the film is shapeless and disjointed. .

Worth seeing for Olmos' performance alone.

Audience Reviews for American Me

Although there's a stumble on a believable performance from the supporting cast and transitions, the film is an intimidating and pulse-pounding force of truth. American Me's hard-hitting exploitation and direction/production/performance from Olmos carries the film as an ominous and exceptional reality check. 4/5

This one could have easily been titled Mexican-American History X. It's a little less polished but every bit as captivating.

Gut-wrenching, brutal, and powerful, American Me is not enjoyable in the conventional sense, but stands out as one of the most impressive purely dramatic offerings. It's a story of violence and its dehumanizing consequences that, in some ways, is reminiscent of The Godfather, with characters that echo those from the Puzo/Ford-Coppola epic. Director Edward James Olmos fearlessly takes aim at the culture of machismo which has enveloped so many inner city youths. This is an unrelenting condemnation of that lifestyle, a portrait of the sort of brutality that violence begets. In my opinion, one of the very few "gang" films that seemed to get it right and doesn't try to glorify the lifestyle, but instead show consequences.

"American Me" is arguably the most significant film not discussed in the same breath with crime epics such as "The Godfather." It was clearly made, both consciously and perhaps subconsciously to be the Mexican Godfather film and that is hardly a bad thing. Its honesty regarding the emotional costs of violence and murder are on par with that film. I don't know what to say to anyone who critiques Edward James Olmos. First, this actor's capacity to convey a complicated range of emotions without words is absolutely staggering and has been seen to great effect in many great films including "Blade Runner." Additionally, he is inarguably the premiere Latino / Chicano filmmaker and actor of all time. If you look at the films he has been involved with, think about how they have dominated the way Hispanic people, Mexicans in particular, have been seen by others who would, largely, not even know of the experiences of their neighbors. "American Me" is so unflinching that, after seeing it, I had to see it again to believe it was actually made by or released by a major studio. Once upon a time studio films featured honest portraits of life but rarely any more. "American Me" tho hardly the knee-slapping comedy some reviewer wanted or expected, conveys an honest sense of the life lived by many without the hope of education or prosperity but with the same need for respect and something bigger than themselves to believe in that you or anyone else has and lives their life by. If you want to see a life perhaps very different than yours depicted with uncommon honesty, watch this film.