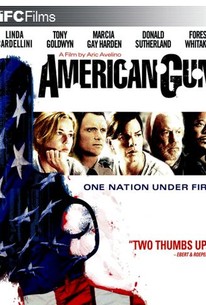 Critics Consensus: Despite its intriguing premise, this earnest anti-gun polemic is too melodramatic to resonate.

Critics Consensus: Despite its intriguing premise, this earnest anti-gun polemic is too melodramatic to resonate.

Critic Consensus: Despite its intriguing premise, this earnest anti-gun polemic is too melodramatic to resonate.

Three stories of how America's obsession with firearms impacts its citizens are explored in this independent drama. Carl Wilk (Donald Sutherland) runs a gun shop in Virginia that has been owned and operated by his family for generations. Carl sees the shop as his family's legacy without paying much mind to what happens with the weapons he sells. When his granddaughter Mary Ann (Linda Cardellini) needs money for college, Carl gives her a job in the store, and while she's hesitant at first, she becomes fascinated with the merchandise as time passes. On the West Side of Chicago, Carl Carter (Forest Whitaker) is the principal of a high school where violence has become a sad fact of life. As Carl and his wife, Sara (Garcelle Beauvais-Nilon), fear for their young son as they worry he could either fall prey to the violence of their community or embrace it himself, Carl receives a severe emotional blow when Jay (Arlen Escarpeta), one of his most promising students, is discovered carrying a pistol. And in Oregon, Janet (Marcia Gay Harden) is a single mother still troubled by the death of her teenaged son three years before, who took his own life after killing a handful of his classmates in a violent incident at a high school. As Janet deals with sharp words from the community, many of whom believe she should be held responsible for her late son's actions, she is unsure how to handle her surviving son, David (Christopher Marquette), who is now of high-school age. American Gun was the first feature film for writer and director Aric Avelino.

It's a bit like watching a weaker version of Crash, with fewer coincidences.

The guns seem to have been shoved in various characters' pockets as afterthought, and Avelino's interlocking stories never click.

[Avelino] shows an almost tender restraint in his story-telling, not pounding us with a message but simply looking steadily at how guns have made these lives difficult.

While not a perfect movie by any means -- a few scenes feel forced -- there is plenty to recommend it, even beyond the truly great performances.

It's so well done.

While this is not exactly a hopeful movie, it's a polished exercise in the kind of social commentary that can wake people up.

A fitting send off to one of America's best actors who dominates the screen.

A moving morality play indicting America for its ongoing love affair with the Second Amendment.

takes too many shortcuts and easy-outs in exploring the issue

It isn't trite or strident - it doesn't shout or pound the desk - and, in a way, its own thoughtfulness is its worst enemy.

American Gun arrives in theaters too late to really make a difference or say anything new on the subject of school shootings.

Not too trite, but not very original or effective, either.