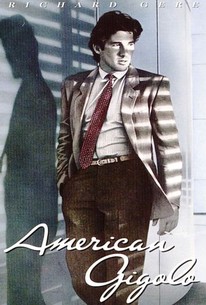 A slick Los Angeles callboy finds love and redemption in Paul Schrader's ultra-stylish drama. High-living prostitute Julian Kay (Richard Gere, stepping in for John Travolta) has it all: the Mercedes, the clothes, access to Beverly Hills' swankiest establishments, and a stable of rich, older female clients. But it all falls apart after he does a favor for his former pimp (Bill Duke) and the trick turns up dead a short while later; Julian's actual client won't give him an alibi, and police detective Sunday (Hector Elizondo) doesn't believe the gigolo's denials. The one person who can help him is frustrated politician's wife (and sole non-paying bedmate) Michelle (Lauren Hutton), if only Julian could let down his defenses and accept her gesture of love. Mixing his admiration for European art cinema with a voyeuristic view of the seamier side of sex and affluence, Schrader renders Julian an inscrutable, emotionally disengaged purveyor of pleasure, decked out in Giorgio Armani clothes coordinated with Ferdinando Scarfiotti's meticulous production design. Amid critical doubts about its artiness and distanced eroticism, American Gigolo surprised everyone by not dying on the box office vine. With some audiences reportedly showing up for repeat viewings of Gere's seductive charms, it became a moderate hit, turning Gere into a star and Armani into the new fashion sensation. Whatever reservations one may have about the movie, it provided two indelible images of 1980s decadence to come: Gere's perusing his "artist's palette" of shirts, ties, and jackets, and Gere's cruising down the Pacific Coast Highway in his convertible to the New Wave strains of Blondie's "Call Me". ~ Lucia Bozzola, Rovi

Ron Cummins
as Reporter
View All

Richard Gere, the highly touted actor critics invariably defend as a talent in search of a script, proves that his method acting can't propel him through a bad script.

Schrader's development of the frame-up story is mechanically melodramatic, and Gere, essentially a boring actor, doesn't help much either. He just cannot carry a picture, even when his passivity and gentleness well serve some aspects of his character...

Schrader's third outing as a director is betrayed by a curious, uncharacteristic evasiveness at its core.

It all becomes something of an academic, if entertaining, exercise that fails to stir the emotions.

The whole movie has a winning sadness about it; take away the story's sensational aspects and what you have is a study in loneliness.

The journey from point A to point B might have been more direct, though given the film's lush visuals and many iconic New York settings, it would probably not have been as pretty.

Schrader manages to underline the glamour of the protagonist's profession while at the same time illustrating its seedy underside.

The story becomes increasingly implausible as its thriller elements kick in, but the moving last shot achieves a sense of spiritual transcendence and grace rare in American movies.

Although the film rather loses its grip in the last two reels, this is, on the whole, an impressive piece of work.

Paul Schrader's homage to Bresson's Pickpocket proves three things: 1) Being a good screenwriter doesn't automatically make you a good director. 2) Hector Elizondo was bald even when he was young. 3) Richard Gere cannot carry a film to save his life.

I think that American Gigalo is an underrated movie to say the least. Most people who do admit to being a fan of it say that it's just because they like Richard Gere in anything. Not only do I think this is a whole-heartedly good movie, it's way more conscious of its time period and atmosphere than pretty much everything else that it was released against. Sure we have some great criticisms of the 80s, made a full decade later. This judges contemporary lifestyles and even narrative expectations. It doesn't hurt that American Gigalo is a beautiful movie to look at; it makes all the content so much more digestible and even backs up the argument. This shows beautiful people doing bizarre things, having a shady moral code and getting away with murder (practically).

First of all, excellent cinematography and cool music (it was all based on Blondie's song call me). What I didn't like was the cast, they weren't that great, especially Gere. The best part was the end. Overall, it's a pretty good drama, but it really could have been better.

Richard Gere is electrifying as the title role in this stylish, sexually charged drama film.