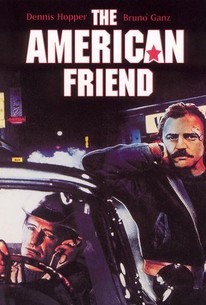 Critics Consensus: The American Friend is a slow burning existential thriller that does justice to the Patricia Highsmith source novel.

Critics Consensus: The American Friend is a slow burning existential thriller that does justice to the Patricia Highsmith source novel.

Critic Consensus: The American Friend is a slow burning existential thriller that does justice to the Patricia Highsmith source novel.

Hamburg denizen Jonathan (Lowell Ganz) is under the impression that he is dying from a blood disease. Jonathan's "American friend," displaced cowboy Ripley (Dennis Hopper), decides to use his illness to his advantage. Ripley introduces him to gangster Minot (Gerard Blain), who proposes to the dying man that he should become an professional mob assassin, assuring a large legacy for his wife and children. Since he is facing death anyway, what has he to lose? Ripley had originally intended to allow Jonathan to do the dirty work that he didn't feel like doing, but has second thoughts when he becomes friends with the doomed man. In the end, it is Ripley who is the loser, even though Jonathan turns out to be right about his days being numbered. Director Wim Wenders based his screenplay for American Friend on one of the many "doppelganger" crime novels by Patricia Highsmith.

Samuel Fuller
as The American

Sandy Whitelaw
as Doctor in Paris

Adolf Hansen
as Schaffner
View All

On DVD This Week: The Martian, Mr. Robot Season One, and More

... only a filmmaker as humane as [director Wim Wenders] could recognize there's no way out of the story's moral corruption.

An absorbing but rarefied, introspective variation on traditional thrilleer motifs, it's probably not the synthetis between the personal and traditional that Wenders needs but it's a fascinating compulsively watchable experiment.

There's something cheerfully perverse about filming a thriller and then tossing out the parts that would help it make sense, but Wim Wenders has a certain success with the method.

Gripping 1977 American thriller from Wim Wenders that turns back on itself with deadly European irony.

Wim Wenders evinces an extremely refined style that is much more effective here than in his previous films. [Full Review in Spanish]

The cool, cunning sociopath of Highsmith's novel becomes a restless international hustler, selling art forgeries and brokering deals (some of which may actually be legal) while travelling back and forth through Germany, France, and the United States.

Most Highsmith adaptations have turned out to be satisfying movies -- the earliest example being Hitchcock's Strangers on a Train and the most recent being Carol -- and this one's no exception.

Although it is a thriller by genre, Wenders is clearly interested in things beyond the mechanics of Ripley's manipulations and Zimmermann's desperation

Crafty and beguiling and unexpectedly smart about people.

By refusing to explain Ripley, this gets closer to Highsmith's character than any other film version.

A gripping Hitchockian thriller based on a novel by Patricia Highsmith.

Nice performances, but too slow for me. And unlike others, I didn't find much to savor here. A thriller/mystery this predictable coupled with such a sluggish pacing is not my cup of entertainment.

beautifully shot and atmospheric thriller based on ripley's game with a great performance by bruno ganz. i admit i found it hard to imagine hopper as ripley but he was quite good too. and it seems to be making a statement about u.s vs. europe. don't trust the americans? hmm...

A brilliant art house noir by Wim Wenders, adapted from Patricia Highsmith's Ripley's Game. Bruno Ganz plays Jonathan Zimmermann, a picture framer with an incurable blood disease, whose precariousness of health is manipulated by Dennis Hopper's Tom Ripley, a sociopathic art dealer seeking to recruit a contract killer for a gangland associate. Eager to provide his wife and son with some financial security before his 'imminent' demise, Zimmermann is sucked into the criminal underworld. Wenders' presentation is dazzling enough to prevent us from scrutinising the rather implausible plot too closely. There are a couple of artsy digressions - unfortunate, because Robby Müller's stunning photography ensures that the film would have been just as aesthetically pleasing without them - but, happily, Wenders doesn't let them get in the way of the story. I could have done without some of Hopper's trademark nutty behaviour - he's Dennis Hopper, right! I'll buy the fact that he's crazy sight unseen - but it's fun to see him playing opposite Nicholas Ray, the director who gave him an early break with Rebel Without a Cause. Curiously, the protagonist here is called Zimmerman(n) and the film closes with Ripley mumbling the lyrics to Bob Dylan's I Pity the Poor Immigrant. Coincidence?

Like a lot of Wenders' stuff, I love the way this movie looks, but am still trying to figure out what the fuck was going on in some scenes.