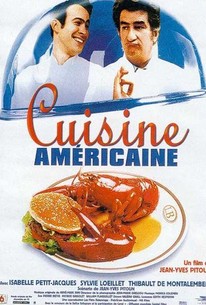 French-born, UCLA-trained screenwriter Jean-Yves Pitoun made his directorial debut with this French comedy in which self-taught cook Lorenzo, aka Loren (Jason Lee) is discharged from the U.S. Navy after hitting a superior who accused him of serving "sissy food" to the Admiral's guests. Back in Brooklyn, Loren works at his Italian-Irish family's pizza parlor and then heads for France to study with his idol, chef Louis Boyer (Eddy Mitchell). After the death of his wife, Boyer raised his daughter Gabrielle (Irene Jacob), now a successful restaurant architect engaged to physician Vincent (Thibault de Montalembert). Gabrielle and Loren compare recipes and finally choose romance from their menu, while Boyer begins to cave in from the stress of tax problems, restaurant critics, and police seeking illegal foreign workers. Jason Lee learned French in order to do the French dialogue version. In the English-language version, actors speak French but switch to English when Lee is onscreen.

There are no critic reviews yet for American Cuisine. Keep checking Rotten Tomatoes for updates!

There are no featured reviews for American Cuisine at this time.