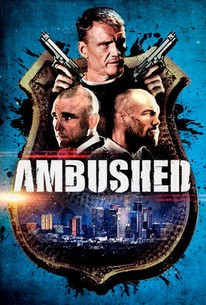 A veteran DEA agent clashes with a crooked cop while pursuing a ruthless cocaine smuggler whose power is slipping in this action thriller starring Dolph Lundgren, Vinnie Jones, and Randy Couture. When ambitious mid-level drug dealers Eddie (Gianni Capaldi) and Frank (Daniel Bonjour) make a risky power grab, a violent underworld war threatens to erupt in the streets of L.A. Before long, DEA Agent Maxwell (Lundgren) is preparing to make his move against international cocaine kingpin Vincent Camastra (Jones), but as undercover Agent Beverly Royce (Carly Pope) dives ever deeper into the city's lucrative drug trade, corrupt cop Jack Reiley (Couture) starts to realize that his days of double-dealing are about to come to an end, and prepares to fight back with everything he's got.

There are no critic reviews yet for Ambushed (Rush). Keep checking Rotten Tomatoes for updates!

No idea what the title for this cheap drug dealer action drama is, supposedly 'Hard Rush' but comes up as 'Ambushed' on IMDb. Not that it really matters though, the first of a trilogy of films starring Lundgren and Vinnie Jones that have been rolled out in 2013 from some tacky straight to DVD company. The casting in these films is pretty good amazingly, its like a collection of mini expendables with Davi, Cung Le, Billy Zane and Couture all popping up. Easy quick work and money for these guys obviously, Jones has been in tonnes of these flicks! literately tonnes! and he plays the same character everytime! The plot is errr sorta about some drug dealers trying to strike it big and errrrrrrm Jones is the big boss on the block...oh geez I dunno. Its an epic muddle of characters none of which I cared about at all and I couldn't follow who was trying to double cross who. The predictable finale shoot out is so confusing I gave up, everyone shoots everyone, police, undercover agents, dealers etc...No idea what happened to Jones in all this, his character just vanishes despite lots of threatening threats to the main characters. Its not all terrible though, some of the visuals are well shot and its all been pieced together in a rather slick way. That's it though, the fights are awful, Dolph looks tired and slow whilst Jones is the boring sadistic unbeatable bad guy. The main two characters are wholly unlikeable, one is a smartass who I really wanted to see get beaten, the other is a cheap Scottish budget version of David Schwimmer! I kid you not, his name is Gianni Capaldi, Google him, the dude is a dead ringer for Schwimmer. I know these cheap action flicks are suppose to be guilty pleasure type stuff with lots of gratuitous violence and gun porn...but what went wrong here?! This film offers nothing of what I just said, maybe a bit of ass and that's it, Dolph isn't even in it much for Pete's sake! What a complete waste of time.

A hard-hitting and tough old school 80's style action film that puts story and substance before the action and does not bring in the action till absolutely necessary. A stylish, thrilling and fun crime flick with some great characters and a solid story. A smart and pretty cool action movie. Dolph Lundgrem is once again the hero you want to route for, he goes in does his job like it is no ones business. Vinnie Jones is such a terrific villain, i wish he was in more of the picture but he does a great job with what he is in. Randy Couture isn't a great actor by any means but has a solid presence and intimidation factor that does work for the character. This is the dream casting for tough guy action flicks. A fast, sharp and furiously slick and very entertaining film