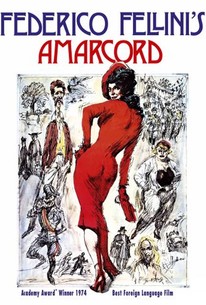 Critics Consensus: Ribald, sweet, and sentimental, Amarcord is a larger-than-life journey through a seaside village and its colorful citizens.

Critics Consensus: Ribald, sweet, and sentimental, Amarcord is a larger-than-life journey through a seaside village and its colorful citizens.

Critic Consensus: Ribald, sweet, and sentimental, Amarcord is a larger-than-life journey through a seaside village and its colorful citizens.

Federico Fellini's warmly nostalgic memory piece examines daily life in the Italian village of Rimini during the reign of Mussolini, and won the 1974 Academy Award as Best Foreign Film. The film's greatest asset is its ability to be sweet without being cloying, due in great part to Danilo Donati's surrealistic art direction and to the frequently bawdy injections of sex and politics by screenwriters Fellini and Tonino Guerra. Fellini clearly has deep affection for the people of this seaside village, warts and all, and communicates it through episodic visual anecdotes which are seen as if through the mists of a favorite dream, playfully scored by Nino Rota and lovingly photographed by Giuseppe Rotunno. ~ Robert Firsching, Rovi

Marcello Di Falco
as The Prince

Continues to resemble something a lewd, grouchy, fitfully indecent silent-movie director might have made for his first time using color and sound. That, at least, would explain the shouting.

Fellini is so bountiful with incident and observation that he makes most other film makers seem stingy.

Orthodox Fellini lovers will give primacy to La Strada or La Dolce Vita, but Amarcord has its fans, and it's easy to see why.

He [Director Fellini] leaves us with the hope that the human comedy just may be able to survive everything.

This Fellini opus is his most accessible to mass audiences since La Dolce Vita.

Uneven, loosely structured, and at times pretty vulgar as well as sentimental, but with some touching and lovely episodes.

The result is touching, sad and wonderfully bittersweet.

Fellini shoots much of the film in muted colors that seem slightly out-of-focus, as if he were attempting to transport us into a dreamlike state.

Fellini's ability to compose a frame that oozes baroque drama and vitality is almost unparalleled and Amarcord more or less succeeded for me in evoking a time period through the eyes of a young boy...

Sweet and endearing for many, irritating and tedious for others.

Seen today, Amarcord is something of a disappointment, clever and moving in places, but also sprawling, undisciplined, clumsy in patches, and decidedly overlong.

[S]imply nonsensical to me. Fascists are idiots, Catholic priests are clowns -- I agree with this. So why don't I feel it?

Fellini reaches the highest point of his personal musings as an artist, using his unmistakable style to recreate his boyhood into a stupendous seriocomic collection of delicious anecdotes and semi-autobiographical reminiscences drenched in a sweet amount of nostalgia.

I admit I've never been a huge Fellini fan, but I found Amarcord to be quite engaging. If anything, it's a portrait of humanity at its most interesting. The movie is funny, strange and surreal, but all at the same time being grounded in the reality of the story. The only minor problem that I had with it is its leisurely pace during portions of the film when you just want to move on to the next adventure. I may be alone in that, but I felt it watching it. Otherwise, the film is a wonderful look at growing up in Italy through the eyes of Frederico Fellini.

An unorthodox semi-autobiography of director Federico Fellini, 1930's Italy, Amarcord is a vivid and ill-tempered mock of the personal youth of the director-author enriched by adolescent desires and social-political subtexts. Bellissima!

As you watch the film, you can tell you are on an incredibly personal journey. Fellini displays the delinquency of youth put against the backdrop of a land with such rich history. All within the context of Fascist rule in Italy. I didn't know Fellini had such a great sense of humor.