Amandla! A Revolution in Four-Part Harmony (2003) 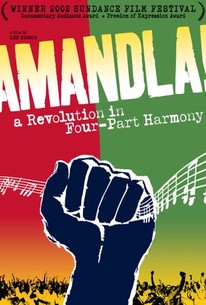 Critics Consensus: The powerful singing in Amandla makes for an uplifting, compelling documentary.

Critics Consensus: The powerful singing in Amandla makes for an uplifting, compelling documentary.

Critic Consensus: The powerful singing in Amandla makes for an uplifting, compelling documentary.

Lee Hirsch spent nine years putting together the ambitious documentary Amandla! A Revolution in Four-Part Harmony. The film records the history of music being used as a form of social protest against Apartheid in South Africa. Interviews and archival footage help to tell the tales of figures like Hugh Masekela, Miriam Makeba, Abdullah Ibrahim, and Vuyisile Mini. Mini's songs became such a powerful social force that his remains were exhumed and reburied in order to show proper respect after the end of Apartheid. This look at political oppression and the courage required to fight it was screened at the 2002 Sundance Film Festival.

Critic Reviews for Amandla! A Revolution in Four-Part Harmony

Filmed performances, archive footage, and some evocative reminiscences from legendary singers and actors such as Miriam Makeba, Vusi Mahlasela and Sibongile Khumalo bring the period back to life.

The power of voices raised together comes through with a clear elation that's undeniable, and in the end Amandla! makes you want to sing.

Like going to the lecture of an impassioned but really disorganized professor. You exit class flipping through your notes and have no idea what most of them mean.

A documentary that is as thoughtful and inspiring as the music it celebrates.

The sound of liberation, set to the beat of human destiny.

This is an expertly assembled film, catching us by the throat early on with the deeply resonant songs and anecdotes, and then tweaking our minds as well.

Director Lee Hirsch expertly weaves in historical footage, photographs and recordings, but the most poignant moments are when the camera is focused on people singing.

Like the songs themselves, "Amandla!" tells a terrible story in a most enthusiastic and upbeat way.

The film has its share of uplifting and emotionally satisfying moments, and the inclusion of performances by South African musicians surely makes it a must-see for die-hard fans.

Directed by Lee Hirsch, Amandla! A Revolution in Four Part Harmony is one of the best documentaries that focus on the grass roots of the music that told everyone and educated them about apartheid.

A fascinating and insightful film.

Audience Reviews for Amandla! A Revolution in Four-Part Harmony

There are no featured audience reviews yet. Click the link below to see what others say about Amandla! A Revolution in Four-Part Harmony!