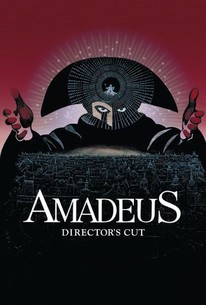 There are no critic reviews yet for Amadeus: Directors Cut. Keep checking Rotten Tomatoes for updates!

An artist's life in the 1700's Europe: all was not simply powdered wigs, not even for the most talented, who has to contend with the obvious consequences of his own party lifestyle choices as well as the considerable political infighting jockeying for royal contracts might bring. Mozart is nonplussed, swept away by his seemingly limitless talent and a rapacious thirst for life itself. Milos Forman's production does justice to that which makes the man: his music, in this ever so lavish undertaking.

The life of Wolfgang Amadeus Mozart as seen through the eyes of envious court composer Antonio Salieri is brought to sumptuous life by Milos Forman in this deservedly multi-Oscar winning adaptation of Peter Schaeffer's play. Tom Hulce is not the first name that springs to mind when thinking of the great composer, but his exuberant performance shows Mozart as a passionate and above all human man with an overflowing confidence in his work and abilities. The centrepiece of the film however is a stunning performance by F. Murray Abraham as his bitter "rival" who sees the man's amazing talent as a slight on his own modest works by god himself. A fine supporting cast and lavish costumery bring the Vienna of the time to believable life and the use of some of the greatest pieces of music ever composed cleverly shows Mozart's prolific skill, his internal turmoil and conflicting pressures that eventually lead to his death. Schaeffer takes some liberties with the facts of his life, but this kind of artistic license makes for the kind of fascinating drama and wonderful characterisation that reaches far beyond the life of one man. It does falter very slightly towards the end as it misses Hulce's larger than life persona after Mozart falls ill, but it's one of those films that shows that the Academy CAN get it right from time to time.

With its well performed acting and with an entertaining story, 'Amadeus: Directors Cut' (1984) really emphasizes its powerful tones used to capture the film's dramatic melody. Bravo!