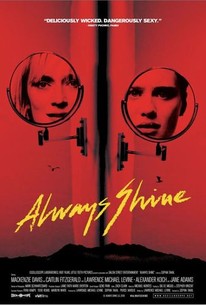 Critics Consensus: The tense and well-acted Always Shine tells an absorbing story while making a sharp, thought-provoking statement on women's roles in Hollywood.

Critics Consensus: The tense and well-acted Always Shine tells an absorbing story while making a sharp, thought-provoking statement on women's roles in Hollywood.

Critic Consensus: The tense and well-acted Always Shine tells an absorbing story while making a sharp, thought-provoking statement on women's roles in Hollywood.

Two women, both actresses with differing degrees of success, travel north from Los Angeles to Big Sur for a weekend vacation in Always Shine, Sophia Takal's twisty, psychological drama. Both see the trip as an opportunity to reconnect after years of competition and jealousy has driven a wedge between them, but upon arrival to their isolated, forest retreat, the pair discovers that their once intimate friendship has deteriorated into forced conversations, betrayals both real and imagined, petty jealousies, and deep-seated resentment. As the women allow their feelings to fester, each begins to lose their bearings not only on the true nature of their relationship, but on their own identities. Mackenzie Davis ("Halt and Catch Fire") and Caitlin FitzGerald ("Masters of Sex") give brave and raw performances as Beth and Anna, two women whose ideas of success are dictated as much by external cultural criterion as their own sense of self-worth. Beautifully photographed and assuredly directed by Takal, Always Shine wraps itself in an evocative shroud of dread and paranoia that lingers long after the final frame.

Noah Gershman
as Reader
View All

The 21 Masters Of Horror Shaping the Genre Right Now
On DVD This Week: Jackie, Incarnate, and More
Moana is Certified Fresh

There is not a beat to miss or a beat amiss in Sophia Takal's standout second feature, Always Shine.

As the fog closes in, so too does the foreboding, expertly tuned to fraught dissonance by director Sophia Takal, who blends art-house flourishes with such horror conventions as the spotty cellphone reception that signals trouble.

[Takal has] created two characters with distinctly different approaches to femininity, but these are hard to separate from the women's habitual self-regard.

FitzGerald and Davis are both excellent, convincingly turning the smallest, most seemingly harmless discussions into highly charged cat-and-mouse workouts.

None of this would be possible without the extraordinary performances of these two actresses.

"Always Shine" is a deft, assured movie with a sly self-reflexive undercurrent containing commentary on sexism and self-idealization that's provocative, and sometimes disturbing.

A testament to the destructive power of both Hollywood and the inherently narcissistic need of many actors to be recognized and successful.

Be prepared to deal with the wrath of a female friendship gone wrong. Always Shine is laden with so much tension that I felt the strong urge to take a Xanax while watching.

Performances that explore the meaning of performance are hard to do, but Davis and FitzGerald pull them off with aplomb.

Takal dips her troubled femmes with the type of transcendental touches we've come to expect from cabalistic expressions of madness at the art-house.

With a haunting finale and two fantastic performances from Mackenzie Davis and Caitlin FitzGerald, this is another winner from Lawrence Michael Levine and Sophia Takal.

It's not a good film, but I'd be damned if I said I didn't love every minute of it.

There are no featured audience reviews yet. Click the link below to see what others say about Always Shine!