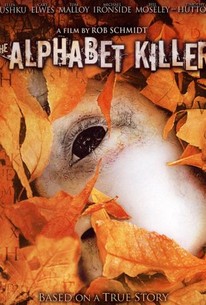 Wrong Turn director Rob Schmidt takes the helm for this thriller inspired by the grim true-life exploits of an alphabet-obsessed New York serial killer and starring Timothy Hutton, Cary Elwes, Eliza Dushku, and Michael Ironside. When Rochester, NY-based police investigator Megan Paige (Dushku) discovers that ten year old Carla Castillo was brutally raped and murdered in nearby Churchville, she becomes convinced that the department is dealing with a serial killer. Paige is a driven detective whose devotion to her job often crosses the border into obsession. Her fiancé, Kenneth Shine (Elwes), is a lieutenant with the Rochester Police Department, and as both jockey for the same promotion, the cracks in their relationship begin to show. Later, when Megan becomes haunted by visions of Carla and fails to solve the case, a concerned Captain Gullikson (Tom Noonan) takes her off of the case. Suffering a nervous breakdown shortly thereafter, Megan is diagnosed with adult onset of paranoid schizophrenia and placed in a psychiatric hospital, where she promptly breaks off her engagement to Kenneth.Two years later, Megan has returned to the precinct as a records clerk, and Kenneth is now the head of the department. Over time, Megan begins developing a friendship with wheelchair-bound Richard Ledge (Hutton). When a local girl named Wendy Walsh is abducted, raped, and murdered in Webster, Megan convinces Kenneth to let her ride along with Detective Steven Harper (Tom Malloy) as an advisor to the case. But the gruesome nature of the case once again prompts strange visions for Megan. Now she is haunted by two murder victims, and to make matters worse, she's beginning to develop embarrassing involuntary ticks and stops taking her medication. As the hallucinations get worse and the case starts to run cold, Megan struggles to find the one piece of evidence that will lead them to the killer before her dark side takes over once again. ~ Jason Buchanan, Rovi

Jack McGee
as Hank
View All

Critic Reviews for The Alphabet Killer

[Eliza Dushku's] commitment to the material is worthier than the cheesy ghost effects of decomposing children that the filmmakers felt the need to add.

It's too bad there was no way around the story's inherent deficit since this effectively unsettling film, directed by Rob Schmidt, chugs along quite well for a while.

The Alphabet Killer may well make enough money to justify a Part II.

The Alphabet Killer suffers from the same symptoms as Passengers: both have an unintentionally feeble-minded character who lazily investigates a mystery while the plot itself seems dull and poorly developed.

Although Schmidt and Malloy have devoted meticulous attention to Megan's manhunt, which is engrossing and briskly paced for the better part of 85 minutes, their final act seems less like a canny trick than a copout.

...a big problem is the preposterousness of the mystery's solution...

Fans of Dushku will get their money's worth. However, the rest of THE ALPHABET KILLER doesn't spell either good detective work or true spectral horror.

Audience Reviews for The Alphabet Killer

The Alphabet Killer was a dull, boring and totally unimpressive psychological horror film based on real facts. The film fails to be interesting and the performances are poorly delivered. I felt bored most of the time watching this, and considering that this is based on real facts, I expected something much better than this. The movie was not worth seeing, and it could have been made much better. This is the type of film that had the potential of being much better, but the filmmakers rely on a poorly written script that just fizzles out towards the middle, and the film ends on a bad note. This is a film that definitely needed to be much better because of the fact that it's based on real events. The tension on-screen, and ultimately horror is not quite there, and it just ends up being a waste of time. The Alphabet Killer could have been a much better film, but the filmmakers have crafted a dud that will surely displease genre fans. I really wanted to enjoy this film, but it was just an awful mess that failed to be entertaining. If you're looking for an effective horror film, you won't find it here. This is a bland affair with a poor storyline and no redeeming qualities. If the film would have been rewritten a few times, then the film would have been much better and not the pointless mess that it turned out to be. The Alphabet Killer is not worth your time. Watch something else instead; you'll be glad you did.

Predictable and boring, this movie was stuck somewhere between a horror film and a crime thriller. Even though it may have been loosely based around true life events, as always I think Schmidt's poetic authority as director fabricated the more silly elements of what could have been a really good story. I knew who the killer was the second time I saw him and without the risk of spoiling a plot that a toddler could unravel, the attempts made at hiding the killer are mediocre. Disappointing.

Megan Paige: Mostly the job is to ask questions. The frustrating part, the part that drives you crazy, is that the people you really want to talk to are dead.  This is how bad this movie is. No when I'm about to go to the bathroom I say, "I'm going to go take an Alphabet Killer." This movie is horrible. I couldn't believe some of the stuff I was watching. I've seen some really bad serial killer movies, but this is probably the worst. It takes itself seriously and shows these horrible hallucinations of ghosts that is so cheap and bad looking. The lead character is horribly written and isn't believable at all.  The lead character is Megan Paige played by Eliza Dushku. She gives a horrible, horrible performance and is laughable in everything she does. Everything from how she stares at the pictures of the crimes, cries, talks and tries to get the audience to take her seriously. She's a pretty horrible casting decision. Now I know this is a direct to DVD movie and it isn't going to be great, but come on. If you can't even make a movie that can't even just be considered bad; don't make a movie. The movie is deplorable and should not be viewed by anyone. It's one of the very few movies I've seen that I see as a complete waste of my time. Most movies, be it good or bad, I can take something that I liked away from it. This movie has nothing good about it. There's nothing you can take away from it, except for how bad it is. If you want to watch a movie that will completely stun you, watch this. It's stunningly bad. Synonymous with Shit.

Quite dull and long feeling. I walked in and out of the room a few times while it was on and had still picked the killer halfway through, (or think I had, it is kind of confusing at the end). This looks like a tv movie, (not sure if it actually is), and the acting is nothing to rave over either. Eliza Dushku is not an actress I usually mind, (I have liked a lot of her tv series), but she is very flat here. Maybe just a bad script, I don't know, but anyhow, could not recommend anyone waste their time with this. Really it is not even worth the rental, (and usually I can see redeeming features where something is worth watching in a B grade movie, but not this time).