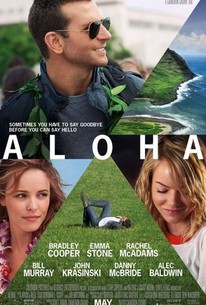 Bradley Cooper stars as a defense worker who teams up with a pilot (Emma Stone) to stop a satellite launch in this romantic comedy from Cameron Crowe. Rachel McAdams co-stars. ~ Jeremy Wheeler, Rovi

Dennis Bumpy Kanahele
as As Himself

The whole story is a tangled mess. Aloha sees itself as a quirky, funny, and sad, but loudly announces when it's trying to be those things.

Even if this were well made in a technical sense, it would still be a weird heap of patriotism, astronomy, and Hawaiian folklore, piled atop a pat and predictable love story.

It's not bad so much as alien, like a romantic comedy made by someone who's researched human behavior but had very few brushes with it in person.

Inspiration has become Cameron Crowe's crack. His films are all-you-can-eat pixie-dust buffet from which all unnecessary excitement has been expunged.

Filmmaker Cameron Crowe can't catch a break with Aloha, a Hawaii-set romcom that is a handful of stories struggling for a unifying tone, but is nowhere near as toxic as its advance buzz.

It comes at us in choppy bursts of brilliance and dopiness. That is at once its great charm and its great curse.

There is an undeniable charm to some of the scenes of this movie, but few movie lovers will be offering it "warm aloha".

Crowe paints with a broad and often heavy-handed brush, leaving us with a film that seems strangely unsure of itself and what it wants to be.

Aloha starts off in Elizabethtown-esque territory but, perhaps thanks to winning performances or the stunning island scenery, it becomes something better.

Aloha is often surprising, sometimes fun and occasionally tone-deaf. If Cooper, Hawaii and/or slow-building thrillers appeal, then this is recommended despite its flaws.

The film is a valiant effort, with flashes of wit and intelligence; but overall, the film takes on too much and accomplishes little.

Aloha is a featherweight concoction that's fuzzy in the head and squishy in the middle. Yes, there's even an obligatory happy couple montage, but the film is also nuanced and eccentric in ways that are very unusual for a studio comedy.

All I can say is, thank Christ I didn't buy this before watching (as I was considering, being a rom com with Emma Stone and Rachel Mcadams). I lasted half hour. And what the heck was up with Emma Stone's tan. I get she was playing part Hawaiian, but it just looked freaky on her. This movie is a big mess. I couldn't follow it, probably because I was so bored I starting flicking through Facebook. I'm not a fan of Bradley cooper either, so it didn't help that this follows his character mostly.

Unfortunately an unfocused and meandering effortÂ despite the tremendous talents involved. The wonder of this quite frankly, is how John Krasinski (of all people) and Rachel McAdams escaped unscathed.

Where to begin with "Aloha"... Cameron Crowe's most recent written and directed piece enters mainly around Bradley Cooper's character (Brian), who returns to his hometown of Hawaii where he spends time with a lost love and a new pilot, Ng (Emma Stone). As far as side stories and underlying tones go, they are endless throughout this film. Not only is it all over the place as far as storytelling goes, but in the script, editing department, and direction, "Aloha" is all over the place. Clearly chopped to fit a thinner run time, this film hurts in more ways than one. The cast is fantastic and I enjoy them in most of their films; however, they have absolutely no chemistry here and every scene comes off as too quirky and awkward to really buy into it. Being a huge fan of some of Cameron Crowe's classics, I had high hopes that he would be returning to form, but this is so far from his original formula, I worry that his glory days will always remain behind him. There are some nice concluding moments and one scene that had me laughing hysterically, but that was not enough to make me care for the film as a whole. To put it simply, "Aloha" is a jumbled, awkward mess that never finds the right balance. An outright awkward cheese-fest of a film!