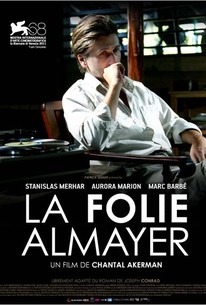 The first narrative feature in seven years by the great Chantal Akerman is this adaptation of Joseph Conrad's debut novel, which concerned a Dutch trader living in Malaysia. Transplanting the story from the 1890s to the 1950s, Akerman has brought the history of an extra half-century of colonialism and foreign intervention to bear on Conrad's tale, a story of cultural conflict, desire, and despair. Having married the adopted Malay daughter of the wealthy Captain Lingard inorder to obtain an inheritance that has failed to materialize, Almayer has become isolated and bitter, trapped in his remote trading post, and investing all his emotional energy in his own beloved daughter, Nina. But, haunted byfeelings of racial and cultural alienation and harboring hatred towards her father, Nina has no intention of providing him with comfort or companionship. -- (C) Official Site

Bunthang Khim
as Ali
View All

Critics Consensus: The Bourne Legacy Is A Solid Sequel

It seems no accident that Almayer's torpor, once a heartache, spreads like tendrils throughout the film.

One of the year's most hypnotic and fascinating films ...

Almayer's Folly had ample opportunity to build something, but ultimately it stayed locked inside of Ackerman's head, never to truly surface.

Akerman's control of the expressive elements, particularly the performances, which are at once subdued and theatrical, and the choreography of the long takes, in which actors move through the encroaching jungle, are exceptional.

Greeted with lackluster early reviews on the festival circuit, Almayer's Folly does not bowl one over but that might partly be because its unsung, borderless subject is malaise, and its transmission.

More a formal treat than a great movie, Almayer's Folly should at least engage fans of director Chantal Akerman.

Fervently passionate and formally meticulous, the latest stunning coup for a director who's made a career of repurposing archetypal storylines.

There's little if any comfort to be found in death, just the sense that our quibbles -- few of which are so enticing as quests for buried riches -- amount to rather little.

A work of engulfing jungles and rivers, vehement and incantatory speeches, and piercing female gazes in front of and behind the camera.

There are no featured audience reviews yet. Click the link below to see what others say about Almayer's Folly!