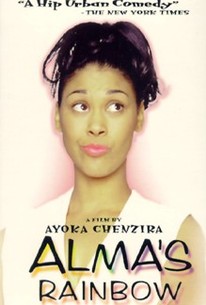 An African-American girl living in Brooklyn comes of age in this comedy-drama. The story's unique twist is that the girl is influenced by a variety of role-models. Rainbow is at an awkward stage of early adolescence. She is too old to play in the streets and too young to date. She is not sure she is ready to grow up. Her prim mother owns a beauty salon. She is not much help to Rainbow. When her sister Ruby surprises them with a visit from Europe, the mother's reserve is easily explained. When the sisters were young both of them tried to become professional singers. They separated when Alma, Rainbow's mom, got pregnant. Ruby went on to have a successful career in Parisian nightclubs impersonating Josephine Baker. Ruby's presence in the lives of the mother and daughter brings them back to life. Her mother begins to rediscover love, and Rainbow becomes inspired to begin experimenting with boys and adulthood.

There are no critic reviews yet for Alma's Rainbow. Keep checking Rotten Tomatoes for updates!

There are no featured reviews for Alma's Rainbow at this time.