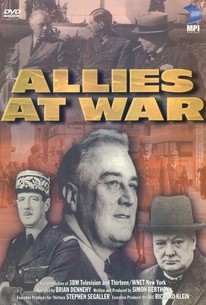 The leadership and military expertise of Franklin D. Roosevelt, Winston Churchill, and Charles De Gaulle proved invaluable to the Allied cause during World War II, but while these three men were fighting for the same side, the relationship between them was not always cheery. De Gaulle admired Churchill, but didn't get along with him especially well, while both Churchill and Roosevelt had a passionate dislike of De Gaulle. Allies at War is a documentary which examines the often strained relationships between these three men, and how they were able to set aside their differences for the good of humanity. Allies at War is narrated by Brian Dennehy.

Critic Reviews for Allies at War

There are no critic reviews yet for Allies at War. Keep checking Rotten Tomatoes for updates!

There are no featured reviews for Allies at War at this time.