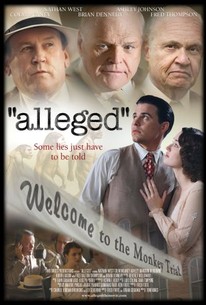 Charles Anderson (Nathan West), a talented young reporter, feels trapped working for his deceased father's newspaper and living in a tiny town (Dayton, TN, 1925) in steep decline. Seeing the Scopes "Monkey Trial" as a once-in-a-lifetime opportunity to break into the journalistic big leagues, Charles manages to insert himself into the middle of the "Trial of the Century." Once there, however, he is torn between his love for the more principled Rose (his fiancée, Ashley Johnson), and the allure of being able to "change the world" under the tutelage of his hero, the great H.L. Mencken of the Baltimore Sun (Colm Meaney). When the truth is at stake, Charles discovers, some lies just have to be told. -- (C) Official Site

Khori Faison
as Abigail
View All

...it's ultimately impossible not to wonder just what Hines originally set out to accomplish with this pedestrian mess.

There are no featured audience reviews yet. Click the link below to see what others say about Alleged!