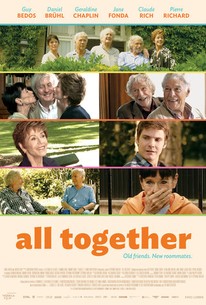 Five aging friends decide to move in together in Stéphane Robelin's crowd-pleasing comedy, starring Jane Fonda (in her first French-language film since Godard's 1972's Tout va bien), Geraldine Chaplin, and Claude Rich. Comfortably retired, they hire a handsome graduate student as a live-in caretaker and rediscover the joys of "communal" living -- but when old secrets and long-simmering jealousies emerge, discord among the group begins to grow. -- (C) Tribeca

News & Interviews for All Together

View All All Together News

Critic Reviews for All Together

All Together is precisely the sort of picture that many have been missing from Hollywood.

It's too bad the filmmaker felt the need to lighten his unvarnished observations about aging with "cute" stuff.

A dour Gallic comedy about five septuagenarian friends living comfortably in the outskirts of Paris who decide to share a house rather than move into retirement homes.

The film's central performances reflect both its celebration of age and a sense of wistfulness.

The acting is solid, and the maturity of vision mixed with humor should appeal to the same audience that turned The Best Exotic Marigold Hotel into such an unexpected runaway hit.

This subdued venture gathers some legendary and some undervalued thespians for a pleasant, if inconsequential look at getting older.

Things proceed amusingly enough, even when the emergence of old deceptions threatens to veer into melodrama.

A French dramady about five friends who discover the advantages and challenges to communal living.

Writer-director Stéphane Robelin pictures a unique approach to getting old for a group of French friends, aided by a can-do and very glamorous transplanted American played by Jane Fonda.

The film is somewhat flimsy, tinged with the impulse to make the elderly characters just the right amount of ridiculous for the benefit of younger viewers.

It's too conventional to be another 'Best Exotic Marigold Hotel' but features light touches of Gallic comedy and the right degree of sentiment.

Audience Reviews for All Together

It's really hard to hate this movie due to its talented cast, but I did find that the subject matter is sort of handled with kid gloves and it doesn't really explore the complexities of what it is to be an aging group of friends in this world and dealing with issues relevant to them. I mean they do deal with getting older and facing certain health issues as well their relationship with their children, but, again, it isn't particularly complex storytelling right here. It's just content to get by on the talent of its cast, and I can't blame this approach because the cast is great with a lot of talented people. Even if the story isn't complex, that's not to say it is bad, I think it is very entertaining to follow this group of aging friends and the stuff that comes out of that. Perhaps some of it is a bit aimless, but I found it to be an entertaining story with plenty of great material for the cast to perform. I did find the ending to be particularly bittersweet because of the implications of it and how Albert's condition will only get worse, but touching in seeing how Albert's friends are sticking by him during his worst moments. I definitely really liked this movie, it isn't perfect and in some ways it could've been better at creating a better and more believable story for this cast, but it's still a really entertaining movie with an excellent cast.