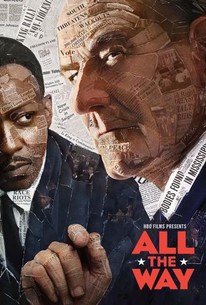 Critics Consensus: Anchored by Bryan Cranston's phenomenal performance as LBJ, All the Way is an engrossing portrayal of a complicated man during a pivotal moment in US history.

Critics Consensus: Anchored by Bryan Cranston's phenomenal performance as LBJ, All the Way is an engrossing portrayal of a complicated man during a pivotal moment in US history.

Critic Consensus: Anchored by Bryan Cranston's phenomenal performance as LBJ, All the Way is an engrossing portrayal of a complicated man during a pivotal moment in US history.

All the Way Videos

All the Way Photos

Adaptation of Robert Schenkkan's Tony Award-winning play about the early days of Lyndon B. Johnson's presidency, from the assassination of John F. Kennedy to the battle over the Civil Rights Act of 1964 and his campaign to stay in the White House.

News & Interviews for All the Way

View All All the Way News

Critic Reviews for All the Way

Beneath the melodrama of the maneuvering for power, there are millions of ordinary human beings who depend on the right outcome.

Just as Johnson steamrolled opposition en route to a landslide 1964 election victory, so Cranston's charisma blew everyone else clean off screen. The actor also went "all the way" and it was absorbing to watch.

Johnson had the same insecurities we all do; but whatever happened, he made sure it happened on his terms. All The Way never lets you forget that legacies, like most things, are mediated by power.

Much of the film's draw, and pleasures, stem from watching Bryan Cranston work the character (not to mention the prosthetic nose and ears).

It's been a while since I saw a TV movie that had everything going for it, yet failed to be memorable. All the Way should have been a classic: electrifying, surprising, moving, artful. It's not.

The movie may have a larger scope, but it retains the power of the original play.

With a unique subject matter and a bit of creative license, Director Jay Roach (Trumbo) brings us a captivating story that both enrages us and draws us in simultaneously.

Here's to clearing space for another Emmy trophy because the moment this movie was placed on the HBO schedule, he won the award.

All The Way is a rare film that tries to actually understand history instead of reducing it to mechanism. [Full review in Spanish]

All the Way is a firm lesson in the price and struggle of progress in American democracy, and the perhaps impossibility of a "nice guy" president. It's also an illustration of both how much and how little has changed in 50 years.

The writing only takes the time to make LBJ into a fully fleshed-out, complex creature, while everyone else is judged simply by Roach and Schenkken's bland conception of moral codes.

Audience Reviews for All the Way

A compelling counterpoint to Selma, one of the greatest films about Civil Rights in film history, All the Way never tells the whole story (thankfully, it's a stand-alone flick not a mini-series) but it presents the most faithful rendering of LBK ever committed to digital. One failing of Selma proved to be in casting Tom Wilkinson (an amazing actor in pretty much any motion picture but Selma) as the 36th President of the United States of America. Not only did the actor not resemble LBJ even marginally (in a film where David Oyelowo and Carmen Ejogo were absolute photo doubles for Martin Luther King, Jr. and his wife Coretta Scott, mind you), he refused to even use any trace of a Texas accent. Sure, it all comes down to performance but that's the problem. Johnson proved to be such a colorful, straight-talking, and pivotal piece of history and that character pretty much sits that aforementioned 2014 Voting Rights drama out. Here, realized by a brilliant chameleon-esque Bryan Cranston, the divisive but history-making spirit of the powerful Texan compellingly comes alive. In this HBO drama based on Robert Schenkkan's award-winning play, Lyndon B. Johnson (Cranston) becomes the President of the United States in the chaotic aftermath of JFK's assassination and spends his first year in office trying to quickly pass the Civil Rights Act. Warts and all, LBJ's life as president gets documented pretty much up until the moments presented in Selma, which took some flak for controversially villainizing Johnson. All the Way paints a way more complete portrait of the man and it's not always complementary. In fact, at times, it tries to paint too sprawling a portrait, cramming an entire history course into a little over two hours. While it embraces a scope slightly beyond the reach of the critically hailed play, however, it also smartly never pulls focus on a performance for the ages that achieves the polar opposite of the presidential pantomime antics on display in Lee Daniels' The Butler. Bottom line: Both Sides Now

A truly engaging portrayal of LBJ and proof that Bryan Cranston is truly one of our best living actors and take unlikeable people and make them likeable. Dealing with the Civil Rights act and his relationship with Martin Luther King as well as trying to get re-elected, Jay Roach gives us a great script and paces the film masterfully. Anthony Mackie is a fine actor but not as believable as King as he maybe could of been! Also Kudos to Melissa Leo as Lady Bird. A true must see! 06-28-2016

A superb political with a fantastic performance, as always, by Bryan Cranston. He is worth watching it for alone but the slick production value and engrossing narrative keeps you enjoying this until the end.

All the Way Quotes