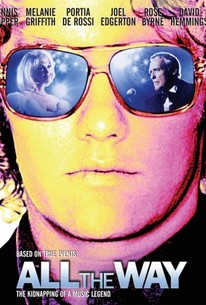 Australian filmmaker Paul Goldman directs the comedy The Night We Called It a Day, based on the actual events during Frank Sinatra's 1974 tour stop in Sydney. Joel Edgerton plays Rod Blue, a long-haired rock promoter in Australia during the '70s. He hopes to save his floundering career by spending all his money booking Frank Sinatra (Dennis Hopper). But when Sinatra arrives with his girlfriend Barbara Marx (Melanie Griffith), he insults the locals by calling reporter Hilary Hunter (Portia de Rossi) "a two-dollar whore." Union leader and future Australian prime minister Bob Hawke (David Field) tries to cancel the tour unless he apologizes, and it's up to Rod and his assistant Audrey (Rose Byrne) to step in and save the tour. Tom Burlinson performs Sinatra's vocal parts. The Night We Called It a Day was shown at the 2003 Cannes Film Festival.

Paul Nicholson
as The Aztecs

Richard Warne
as The Aztecs

Brett Creswell
as The Aztecs

Jon Holliday
as The Aztecs

Critic Reviews for All the Way

There are no critic reviews yet for All the Way. Keep checking Rotten Tomatoes for updates!

Audience Reviews for All the Way

(2004 Director **to be added) Interesting storyline. Australian wanna be promoter hits the jackpot when contacts land him "Frank Sinatra" himself (played by Dennis Hopper). Paradise is never what it seems (more review--to be continued).

All the Way Quotes