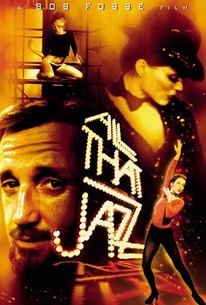 Critics Consensus: Director Bob Fosse and star Roy Scheider are at the top of their games in this dazzling, self-aware stage drama about a death-obsessed director-choreographer.

Critics Consensus: Director Bob Fosse and star Roy Scheider are at the top of their games in this dazzling, self-aware stage drama about a death-obsessed director-choreographer.

Critic Consensus: Director Bob Fosse and star Roy Scheider are at the top of their games in this dazzling, self-aware stage drama about a death-obsessed director-choreographer.

All That Jazz Photos

"It's showtime!" In this part film à clef, part musical phantasmagoria, director/choreographer Bob Fosse takes a Felliniesque look at the life of a driven entertainer. Joe Gideon (Roy Scheider, channeling Fosse) is the ultimate work (and pleasure)-aholic, as he knocks back a daily dose of amphetamines to juggle a new Broadway production while editing his new movie, not to mention ex-wife Audrey (Leland Palmer), steady girlfriend Kate (Ann Reinking), a young daughter, and various conquests. Joe cannot, however, avoid intimations of mortality from white-clad vision Angelique (Jessica Lange) that lead him to look back at his life as he heads for a near-inevitable coronary and his departure from this mortal coil with the appropriate razzle-dazzle. Taking his cue from Federico Fellini's 8 1/2 (1963), Fosse moves from realistic dance numbers to extravagant flights of cinematic fancy, as Joe meditates on his life, his women, and his death. Following a similarly dark revisionist vein as Martin Scorsese's New York, New York (1977), Fosse shows the stiff price that entertaining exacts on entertainers (among other things, he intercuts graphic footage of open-heart surgery with a song and dance), mercilessly reversing the feel-good mood of classical movie musicals. Critics praised Fosse's daring even as they damned his self-indulgence, while Scheider was lauded for giving the best performance of his career. Though not a disastrous failure, All That Jazz came nowhere near the popularity of 1978's Grease, as late '70s audiences increasingly turned away from "difficult" movies. For all its excesses, Fosse's fiercely personal approach turned All That Jazz into another striking work from one of the few directors able to make, and experiment with, movie musicals after the 1960s.

Keith Gordon
as Joe (as a boy)

Theresa Merritt
as Cast of NY/LA

News & Interviews for All That Jazz

View All All That Jazz News

Critic Reviews for All That Jazz

This is a plausible milestone in the evolution of the Hollywood film, a quivering, pulsating, dynamic, excessive and flawed film that wears its alienation proudly where its heart should be.

By the time the film is over, the movie has degenerated with a jaundiced vengeance. Fosse's sour, grandstanding cynicism imposed an intolerable burden of self-pity on his talent, our compassion and the tradition of the backstage musical.

Though Scheider is a wry, sensitive actor, he soon gets lost in the vulgar theatrics.

Almost every scene is excruciating (and a few are appalling), yet the film stirs an obscene fascination with its rapid, speed-freak cutting and passionate psychological striptease.

A self-important, egomaniacal, wonderfully choreographed, often compelling film which portrays the energetic life, and preoccupation with death, of a director-choreographer.

It's very pleased with itself.

A tour de force self-portrait by the brilliant writer-director-choreographer Bob Fosse, as seamlessly impersonated in a career-peak turn from Roy Scheider.

It's the opposite of a vanity project.

The music lacks personality and it never shines too bright. [Full Review in Spanish]

Allows us to go deeper inside a movie that was so much more than just another musical, it is a window into the soul of an artist.

Bob Fosse's half-confession about what a jerk he was to the women in his life...

Audience Reviews for All That Jazz

One of the best films I ever watched in my life.

Decent depiction of the toll the daily grind of putting together a new show takes on a director, and the tension between the drive to produce original art and the knowledge that your time has to end eventually. Spacey dream sequences, entertaining dance numbers and the spectre of mortality keep you watching... at least until the bizarre, excessive finale. A rather "out there" film, and one that's more of a "should see" than a "want to see," it's a sharp piece of art but it's probably not for everyone.

Imagine a vain dancer admiring himself while moving between two mirrors and you've an idea of this work, only that dancer is Bob Fosse, a reality show all by his lonesome, in love with hating himself for loving himself too much, endless reflections stretching to an infinity. Wildly creative and passionate about dance, this is must see for every admirer of musical comedy.

Clever flashback structure with Angelique on the cluttered "backstage" of Joe's life, sexy and sexual choreography (as expected from Fosse), fantastic performance by Roy Scheider (all the iterations of "It's showtime, folks!"). Really tight story overall about existential angst in life and art with well-timed exposition-while-dancing scenes: Audrey and Joe candidly discussing their failed marriage while she's rehearsing and he's relegated to her barre; Joe, choreographing a routine with his daughter, Michelle, while she fishes for information about his love life. Ann Reinking, as the new woman, is oh-so-slinky in her dance numbers. The conclusion is much too obvious - so many numbers devoted to regret and loss, all with the faux happy Broadway veneer. It's meant to be ironic, but it becomes self-indulgent at a point. Scheider also doesn't really get any singing or dancing opportunities. He nails the drama, but I wish there could have been at one least number in which he wasn't just dancing around somebody or harmonizing with the angel-voiced Ben Vereen.

All That Jazz Quotes