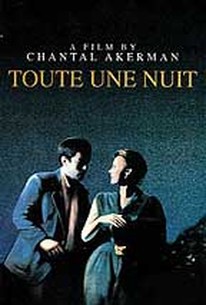 The English-language title of Toute Une Nuit is All Night Long, but don't confuse this film with the like-titled 1981 Gene Hackman-Barbra Streisand comedy. Belgian filmmaker Chantal Akerman uses a fragmentary approach to explore a series of personal relationships among a largely nonprofessional cast. It all takes place during one long, hot, stormy summer night. Dialogue is at a premium: Akerman tells her "stories" with objects, background noises, shadows, and subtle, seemingly unrehearsed shifts of facial expression. As in many of her earlier films, Akerman benefits from the extensive creative input of cinematographer Babette Mangolte. ~ Hal Erickson, Rovi

Critic Reviews for All Night Long

Not a great film, but one that catches your attention.

Audience Reviews for All Night Long

There are no featured audience reviews yet. Click the link below to see what others say about All Night Long!