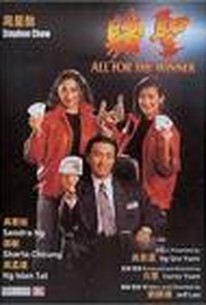 Du sheng (All for the Winner) Photos

This low-budget knockoff of God of Gamblers succeeds primarily due to an exuberant star-making turn from Stephen Chiau as Shing, a rube from the Chinese mainland who comes to Hong Kong to visit his uncle, Blackie Tat (Ng Man-tat). Blackie isn't thrilled about his nephew's visit until he learns that Shing has the ability to see through things, a sort of X-ray vision. As a gambler, it doesn't take Blackie long to realize that Shing's abilities could make him a great deal of money, but news travels quickly and Shing is soon torn between two powerful gamblers who want him to be their proxy in a big competition. Taiwanese kingpin Chan Chung gets Shing first, so his Hong Kong rival, Hung Kong (Paul Chun), tries to kill him. Shing survives the attempt, but Hung manages to stop him from competing by kidnapping Chan's pretty bodyguard, Yee-mong (Sharla Cheung), who has won the young man's heart. The film is filled with action as well as humorous takeoffs on everything from Fist of Fury to A Better Tomorrow. In an amusing twist of fate, this knockoff actually made more money than its model, and was followed by a sequel audaciously titled God of Gamblers II. Sandra Ng co-stars with co-director Corey Yuen and Sheila Chan. ~ Robert Firsching, Rovi

Yun-Fat Chow
as God of Gamblers

Wan Yeung-Ming
as Billy
View All

Critic Reviews for Du sheng (All for the Winner)

There are no critic reviews yet for Du sheng (All for the Winner). Keep checking Rotten Tomatoes for updates!

Audience Reviews for Du sheng (All for the Winner)

Du sheng (All for the Winner) Quotes