All Eyez on Me 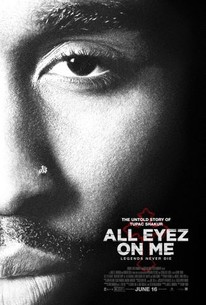 Critics Consensus: Despite Demetrius Shipp Jr.'s fine lead performance, All Eyez on Me is mostly a surface-skimming, by-the-numbers biopic of a larger-than-life icon.

Critics Consensus: Despite Demetrius Shipp Jr.'s fine lead performance, All Eyez on Me is mostly a surface-skimming, by-the-numbers biopic of a larger-than-life icon.

Critic Consensus: Despite Demetrius Shipp Jr.'s fine lead performance, All Eyez on Me is mostly a surface-skimming, by-the-numbers biopic of a larger-than-life icon.

All Eyez on Me Videos

All Eyez on Me Photos

ALL EYEZ ON ME tells the true and untold story of prolific rapper, actor, poet and activist Tupac Shakur. The film follows Shakur from his early days in New York City to his evolution into being one of the world's most recognized and influential voices before his untimely death at the age of 25. Against all odds, Shakur's raw talent, powerful lyrics and revolutionary mind-set propelled him into becoming a cultural icon whose legacy continues to grow long after his passing. ALL EYEZ ON ME stars Kat Graham, Lauren Cohan, Hill Harper, Jamal Woolard, Danai Gurira and Demetrius Shipp Jr. as Tupac Shakur.

News & Interviews for All Eyez on Me

View All All Eyez on Me News

Critic Reviews for All Eyez on Me

How they managed to make a movie about a guy who went from poverty to fame to prison to fame again, before being shot five times and surviving, and then being shot four times and dying, into something as compelling as a tax return is anyone's guess.

The movie churns out his story like sausage meat: turgidly linear, and tasteless in a literal sense of dead-on-the-palate.

It has similar material - with similar scenes and similar tropes - to F Gary Gray's Straight Outta Compton, about NWA, but with less passion and less energy.

This Wikipedia-page biopic races through the rapper's Major Life Events without ever getting to grips with the real questions.

The film's director, Benny Boom, is best known for music videos, but he's done something remarkable here: He's taken a legend and made him into a man.

Shipp Jr. fails to capture Pac's multiplicity, much less portray the depth of his talent.

[T]he weak screenplay doesn't inspire viewers. While the focus is always on Tupac, there is not enough material to form an emotive connection with him as a person.

ALL EYEZ ON ME will, without a doubt, have value to a viewer - and even though this is a hugely flawed film, this man's life will forever be fascinating to observe and cherish

Tupac fans won't need a reason for watching this movie. But if you are wondering whether it does justice to the beloved artist, then yes it does and you must not miss.

For most of the 140 minute running time the film plays like a bio-pic suffering from ADD -- unable to focus on elements of Shakur's life that could have given more insight to his legacy.

Legends never die. The legacy also doesn't but there's sadly nothing here to further it.

A hollowly pretentious biopic that's equivalent to talking to the biggest Tupac fan for 140 minutes.

Audience Reviews for All Eyez on Me

In terms of perspective, it's pretty much exactly what I was afraid Straight Outta Compton would be. As a movie itself though, it's a disjointed, cheap-looking, paint by numbers biopic that did not manage overcome its niche at all... Fuck that kid looks the part though.

Since his death over twenty years ago Tupac Shakur has become something of a prophet in his legacy; a deity of the rap world in which the mythology only continues to grow-building a perception and persona of a man who held some secret as to how our society operated and why when, and this is the most valuable thing the new biopic All Eyez on Me offers, it seems the alarmingly young Shakur was still very much trying to figure out who he was never mind the bigger questions the culture he was raised in implied for his future and the future state of our world. All of that to say director Benny Boom (Next Day Air) and his team of three rather novice screenwriters had a lot to overcome in order to deliver a final product that was not only satisfying, but relevant in terms of adding something substantial to the conversation around the life and times of Shakur. There has been a barrage of material released since the artist's untimely death in September of 1996, but All Eyez on Me would mark the first narrative feature and arguably the one with the best odds of reaching the widest audience. With this weight and presumed pressure of responsibility on his shoulders Boom has delivered what is more or less a by the numbers biopic for what was very clearly an individual who couldn't have operated by the numbers if he wanted to. Shakur was a man who seemingly had a constant conflict of conscience going on within him-attempting to balance the obligation he felt he had as an orator for the black community while simultaneously looking to solve such societal issues in the moment which often times resulted in compulsive acts of violence and/or spouting things from his mouth that he didn't consider before saying them in front of a rolling camera. And while All Eyez on Me and its look-alike lead in newcomer Demetrius Shipp Jr. does in fact attempt to delve into this clash of consciousness Shakur constantly dealt with it's never able to transcend the tropes of the music biography enough to allow the audience to understand what cultivated and motivated these feelings. Sure, we see flashbacks galore and are privy to relationships in Shakur's life many might not be aware of that inherently give new light to this persona that has been crafted by the media and his constituent's since his death, but none of it to such an extent we feel we're inside the mind of Tupac thus restricting us from feeling like we've seen the real story of the man's life. read the whole review at www.reviewsfromabed.com

It may seem as if the crew behind this film knew what they were doing. All Eyez on Me has one job to accomplish... guess what that was. You know, if they would probably work more into the effort, probably this might as well be enjoyable, but also forgettable compared to the other movies released this year. Instead, what they just give us is just a poor man's excuse to get money by doing absolutely nothing.

All Eyez on Me Quotes