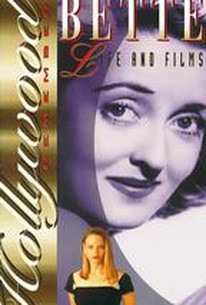 Known equally for her steely persona as her award-winning talent, Bette Davis was Tinseltown's greatest diva. Her legacy is documented in Hollywood Remembers: All About Bette. Davis took the movie business by storm playing everything from a fragile blind woman to a vicious killer. Her years at the various studios taught her to deal wisely in business matters while jockeying for better and better leading roles. With two Academy awards under her belt, Davis continued to dominate the box office late into her career. Archival footage and film clips complete this Jodie Foster-narrated look back at the first lady of the American screen.

Critic Reviews for All About Bette

There are no critic reviews yet for All About Bette. Keep checking Rotten Tomatoes for updates!

There are no featured reviews for All About Bette at this time.

All About Bette Quotes