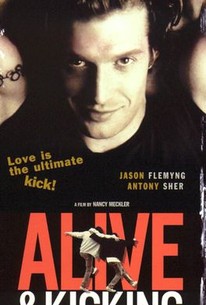 A dancer whose life and art were integrally connected to his body finds himself going through profound changes when he discovers that he has AIDS. Tonio (Jason Flemyng) recently inherited a plum role in the ballet Indian Summer from his friend Ramon (Anthony Higgins), who recently passed on from AIDS-related illnesses. Tonio, however, refuses all treatments that might interfere with his dancing abilities, determined that if he's going out, he's going out on his feet, doing what he loves most. Tonio meets Jack (Anthony Sher) at Ramon's funeral, and they later cross paths again at a gay dance club. Jack was once Ramon's lover and is about as different from Tonio as two people could be; while Tonio has the trim, athletic build of a dancer, Jack is a stocky guy who looks like he spends most of his day sitting down -- which he does, actually, as a counselor for HIV-positive patients. Jack becomes infatuated with Tonio and tries to win him over, although a healthier Tonio would never have given a second look to someone who lacks his obsession with the body. Indian Summer was written by Martin Sherman, best known for his play Bent; the film has also been shown under the title Alive and Kicking.

Dugald Bruce-Lockhart
as Man at Club

John Baxter
as Man at Bar

Mary Cruickshank
as Woman at Party

Allan Corduner
as Therapist at Party

Martin Sherman
as Man at Pub

Frank Boyce
as Man in Park

Stephen Houghton
as Dancer
View All

Critic Reviews for Alive and Kicking

Audience Reviews for Alive and Kicking

There are no featured audience reviews yet. Click the link below to see what others say about Alive and Kicking!