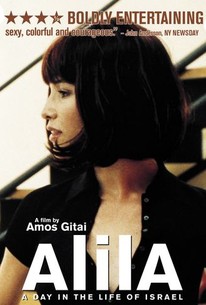 Directed by Amos Gitai, Alila is based on Yehoshua Kenaz's novel Returning Lost Love and chronicles the trials and tribulations of every day life in Tel Aviv. Most of the film revolves around an apartment block on the working-class borders of Tel Aviv, where the trysts of residents Hezi (Amos Lavie) and Gabi (Yael Abecassis) attract their neighbors' attention, as does the unauthorized construction of an additional wing to the building. A neighboring family patriarch, meanwhile, is dealing with legal troubles (he hired illegal Chinese construction workers), the AWOL status of his son, and his wife's affair with a younger man. A Holocaust survivor (Yosef Carmon) and his Filipino housekeeper (Lyn Shiao Zamir) further illustrate the conflict between Jews, Jews of different extractions, and Arabs in the community.

Tomer Russo
as The Officer

Hana Laszlo
as Mali
View All

It's too acerbic to be funny and too detached to be really moving.

The story and even the characters turn out to be less interesting than the overview it gives us of the way Israelis live now, its portrait of a dislocated society where despair rumbles beneath the surface of everyday life.

None of the characters or situations truly manages to hold our attention, though there are some arresting moments.

Gitai ... records the comings and goings with a keen eye.

Amos Gitai's acidly comic study of life in a flimsy Tel Aviv apartment complex is a sour urban mosaic whose seedy characters, try as they might, can't get out of one another's faces.

Gitai delivers an amazing film every bit as satisfying as his masterpiece Kippur (2001).

Suggesting that the strain of the Arab conflict has gotten to the Israelis and that peace might only be a pipe dream.

...Gitai has populated the story with one unlikable character after another, making it impossible for the viewer to connect with anything on screen.

For all its flaws, Alila is an interesting social issue film.

For non-Israeli audiences, Alila is an alternately illuminating and confounding glimpse into seldom-seen aspects of the country.

Though absorbing enough, Alila must be counted a noble failure, if only because its efforts to follow the screwed-up lives of 12 hapless souls in a seedy Tel Aviv apartment building finally add up more to mere mimicry than commentary.

[font=Century Gothic][color=royalblue]"Alila" is an Israeli movie set in an apartment building. It features various denizens while focusing on a divorced builder and his son who has gone AWOL from the army and a very anonymous affair. Director Amos Gitai uses exquisite tracking shots and jump cuts to tell his story but Michael Haneke fell flat on his face doing pretty much the same thing with "Code Unknown" in 2001. "Alila" is a slight improvement.(Both "Alila" and "Code Unknown" make mention of illegal immigration.) What this technique allows for is glimpses into the lives of its characters but because that is all we get, there is never a sense that we ever get know any of them, and several remain complete mysteries. There is something here about how neighbors interact with each other but not much. [/color][/font]