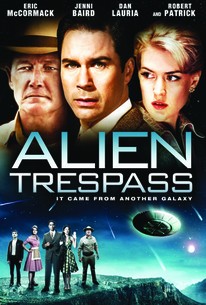 Set in 1957, "Alien Trespass" chronicles a fiery object from outer space that crashes into a mountaintop in the California desert, bringing the threat of disaster to Earth. Out of the flying saucer escapes a murderous creature--the Ghota--which is bent on destroying all life forms on the planet. A benevolent alien from the spaceship, Urp, inhabits the body of Ted Lewis--a local astronomer--and with the help of Tammy, a waitress from the local diner, sets out to save mankind.

This lazy effort gets points only for truly loving -- perhaps to a fault -- the cheapo creature flicks of the 1950s.

Alien Trespass, with a rating notice that mentions 'brief historical smoking,' is at least better than last year's official remake of The Day the Earth Stood Still.

It's a satire without laughs, a parody without punch lines, a careful copy that replicates everything except the original's life.

It's comfy. It's kitschy. There are lovely enticements but also much that is simply put and beautifully, beguilingly silly.

While there's a lot to admire, it all feels like an engaging though needless academic exercise.

Sinks under the weight of its homage.

ALIEN TRESPASS -- these aliens can trespass on a movie screen near me anytime!

An oddity from another time and place, and well worth a look because of it.

The patience and concentration of the film to not wink itself into a coma is amazing to behold, and I was flabbergasted over just how engrossing and playful the picture is.

Not nearly as awful as it could have been...it at least knows that it's cheesy, which makes it more fun.

It's not really clear why this movie was necessary %u2013 it does not reinvent the 50's movie so much as do a highly faithful cover version of it. (Gus Van Sandy's shot-for-shot remake of Psycho is a similar pointless academic exercise.)

I hoped this would be as good as it promised, finding the idea of a '50's style sci-fi resurrected appealing, but the makers (the director's an X Files alum) flunked because they, in typical modern day detachment, forgot the essential ingredient: to give a damn. No one here does and the hip, modern, cooler-than-thou, winkin-at-you, don't-we-look-fabulous result so ruins the work that I couldn't help but finally agreeing to not giving a damn either. The monster's based on a one off novelty song of the '60's.

Well intended but pointless exercise in recreating those wacky sci-fi films from the 50's. There's a few funny moments here and there mostly thanks to a well cast Eric McCormack but unlike Lost Skeleton Of Cadavra this is an homage (sorta like Ti West's House of the Devil) and not a spoof-style comedy.

"It came from another galaxy. A creeping, crawling nightmare of terror!" After crash landing near a desert town, an alien enlists the help of a local waitress to re-capture a monster that escaped from the wreckage of his space ship.

REVIEW
I started watching Alien Trespass with some reservations: I'm definitely a fan of the "source material" for this movie, but I haven't really enjoyed many of the handful of retro/homage/pastiche 50s-style genre films I've seen in the past decade. In the early going, if you're inclined to be suspicious of the movie's intent (and I was), you may find some technical details that are sort of jarring: "cheap" CGI substituting for the papier-mâché-string-and-sparklers school of SFX, matte paintings and studio backdrops that somehow don't feel period-authentic (might be that the compositing is too good, even when it's intentionally "bad?"); that sort of thing. However, once I was introduced to the excellent and very likable cast, and allowed myself to settle into the rhythm of the dialogue, none of that mattered. There's a gentleness in the style and humour that just felt right to me. Of course "right" is completely subjective, and all but useless in determining if you will like the movie; I'll say instead that if you're not in a technical-nitpicking frame of mind (or if you are, but you're willing and able to get past that), it's a very easy movie to enjoy, especially if you're relaxing with it on a lazy Sunday afternoon. There's a lot of sharp, caustic humour to be found on TV and in movies these days, and that's not a criticism - I guess I enjoy ironic detachment, sarcasm, and "snark" as much as the next guy - but if you come to this movie expecting that kind of experience, I think you're going to be disappointed. If, on the other hand, you genuinely like the source material, and you're willing to enjoy something pretty much on its own terms, without the broad safety net of winking self-awareness that most "retro" films seem to employ, then I think you'll have a good time with Alien Trespass.

Alien Trespass really had me excited. I love the old 50's Sci-Fi films and couldn't wait to see a modern one with that recreated feel. The problem comes in the inconsistency of quality. For example, some of the performers take it seriously, some ham it up 50's style, some are just plain bad and some play is it as a spoof. All the sound effects are perfect but the alien and green screen are very poor, on purpose of course, but they really don't fit in with the sharp and modern cinematography. There's some good stuff here, and it could have been a success if it had gone for either high quality or laughs, but as it stands it just makes you want to revisit the classics. Which may be a good thing.