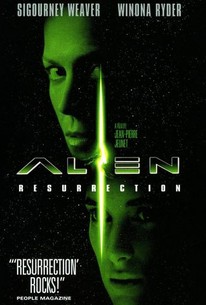 Two centuries after Ellen Ripley's death, doctors aboard the space station Auriga clone her using a blood sample taken from Fiorna 161, in hopes of harvesting the queen embryo that was incubating inside of her when she was trapped on the remote penal planet. Finally succeeding after numerous attempts, they remove the alien and repair the clone for further study. Before long, the Ripley clone has gained consciousness, and displays superhuman capabilities that suggest it possesses alien DNA. When Ripley discovers that General Perez (Dan Hedaya) is keeping the queen in a heavily fortified room of the space station, she warns the military man and his scientists that the creature cannot be contained no matter how hard they try. Meanwhile, General Perez has hired a crew of space pirates to deliver the cryogenically frozen bodies of another ship to the Auriga so they can be used to breed more aliens. The leader of the pirates is Johner (Ron Perlman), a gruff mercenary who engages Ripley to no avail. When Call (Winona Ryder), one of Johner's crewmembers, admits that she was sent to assassinate Ripley, General Perez attempts to have the pirates executed. The result is a tense standoff between the pirates and the military men, with the aliens causing havoc after breaking free of their containment cells. Attempting a daring escape, Ripley and the pirates discover the lab where she was cloned before being forced to swim through the mess hall, which has been submerged in water during the aliens' escape. Discovering a carefully guarded secret about Call's past, Ripley attempts to convince her to alter the Auruga's course, which was set to Earth when the ship went into emergency mode. With the fate of mankind hanging in the balance, Ripley is captured by the aliens and taken to their nest, where she comes face to face with the mutated results of the scientists' experiments. ~ Jason Buchanan, Rovi

Rodney Mitchell
as Soldier with Glove

Who Should The Aliens Fight Next?
Horror Movie Survivor Hall of Fame

The franchise has lost none of its taste for acid-spewing, flesh-impaling, entrail-dripping gore. But the tone has changed...If this is your cup of slime, this jauntily gruesome installment won't disappoint.

Weaver obviously knows her role by now, but Winona Ryder is as much of an action hero as Julie Nixon would be, going way out of her element.

It brings a mordant, crackerjack wit to the world of chest-busting, head-ripping creepazoids from beyond.

It satisfactorily recycles the great surprises that made the first movie so powerful. And most significantly, it makes a big hoot of the whole business.

If you need to read a review to decide if you want to see "Alien Resurrection," you absolutely shouldn't be going.

The best way to enjoy this so-so effort is to treat the whole shebang like a football match where everybody already knows the result. Cheer on the dumb humans, boo the even dumber aliens.

The team chose to raise the franchise from the ashes, but instead of a golden phoenix they produced a jaundiced turkey.

Jeunet,... has both a pictorial imagination and a healthy sense of irony, qualities that may not have viewers on the edge of their seats but do tend to make "Resurrectoin" quirky fun.

It's tense, mordantly funny, very graphic and bloody, while Weaver is on great form as the clone with some interesting alien influences on her personality.

It's at least more watchable than Alien3 in that it knows it's a bit crap but has a blast with it anyway! I have to admire that, even if it still won't score that highly...

Without anything to pull the project in a single direction, it fumbles and flails, punctuated by some interesting visuals and action beats, but content to coast on the calm seas of been-there, done-that.

The fourth installment of the series, looking to further the character arc of Ripley and clearly unsure of which direction to take, curiously chooses to have her embrace the alien species. The aliens themselves are reduced to mere plot devices and are hardly up to a single scare. While less preachy than the third it still resorts to characters yelling in an attempt to disguise a lack of direction. Joss Whedon's script is more succinct than the third, too.

Definitely better than the previous installment, this fourth Alien film doesn't add anything new or relevant to the series but neither does it disappoint. It has plenty of action and scares, a mildly interesting plot and a particularly grotesque ending that works just fine.

I don't know what's going on here. Just stick to the first three.