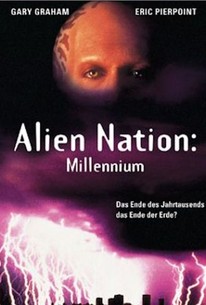 In this TV movie spun off from the popular sci-fi series Alien Nation, the year 2000 is approaching and Earth-born detective Matthew Sykes (Gary Graham) and his space-alien partner George Francisco (Eric Pierpont) are on the trail of a "newcomer" who has started a bizarre religious cult. Preying on pre-millennial anxieties, the cult leader claims to offer a fast track to bliss, but Sykes and Francisco fear the cult's virtual reality scheme could prove deadly. Francisco is especially worried when he discovers his son Buck (Sean Six) has fallen prey to the cult's teachings. Like the TV series, Alien Nation: Millennium was adapted from the characters created in the 1988 feature film of the same name.

Jason Behr
as Randy
View All

There are no critic reviews yet for Alien Nation: Millennium. Keep checking Rotten Tomatoes for updates!

There are no featured reviews for Alien Nation: Millennium at this time.