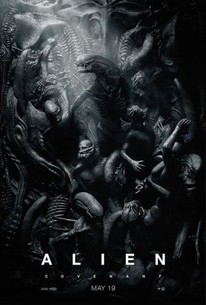 Critics Consensus: Alien: Covenant delivers another satisfying round of close-quarters deep-space terror, even if it doesn't take the saga in any new directions.

Critics Consensus: Alien: Covenant delivers another satisfying round of close-quarters deep-space terror, even if it doesn't take the saga in any new directions.

Critic Consensus: Alien: Covenant delivers another satisfying round of close-quarters deep-space terror, even if it doesn't take the saga in any new directions.

Ridley Scott returns to the universe he created, with ALIEN: COVENANT, a new chapter in his groundbreaking ALIEN franchise. The crew of the colony ship Covenant, bound for a remote planet on the far side of the galaxy, discovers what they think is an uncharted paradise, but is actually a dark, dangerous world. When they uncover a threat beyond their imagination, they must attempt a harrowing escape.

What to Watch With The Girlfriend Experience’s Carmen Ejogo
On DVD This Week: Alien: Covenant, Riverdale Season 1, and More
The Matrix Trilogy, Bad Santa, Chef, and More on Netflix and Amazon Prime This Week

Unfortunately, it starts off like you're getting a sequel to Prometheus.

In space, no one can hear you laugh.

Yet again a crew sniffs after a mysterious ping and sticks their nose in a deadly larva pod. Are our astronauts learning? God no. And if the audience expected a different plot, we're not learning, either.

As redesigns go, Alien: Covenant is not ambitious, but it's roaringly, repulsively effective.

This may not be a movie that reinvents the wheel. But it's one that knows how to make it roll.

It's an Alien movie for our times, one in which mankind isn't just under the thumb of an oppressive corporation but sowing the seeds of its own destruction on a more sweeping scale.

I didn't really love anything about this movie, except for Michael Fassbender.

This movie thought it was very deep... And it was so superficial. It was so basic.

All of the fine production and acting is done in the service of a story that is ultimately empty, even though it wants us to believe it brimming over with fascinating and revelatory ideas.

While the film isn't perfect due to issues like the non-development of minor characters and an interesting religious concept that's brought up and subsequently ignored, I quite liked Alien: Covenant.

Say what you will about Prometheus, but I would take a film that makes me think over a bunch of CGI'd cat-and-mouse chase-horror sequences and an uninspired plot...

How is it possible that the sequel to Ridley Scott's "Prometheus" could wind up being an even more debated, divisive, and controversial entry in the inherently unpredictable "Alien" franchise? "Alien: Covenant" is that film, doubling as a true sequel to the cerebral "Prometheus" and the close quarters action-terror of "Alien." But wait, this is Ridley Scott we are dealing with here! If you thought this was going to be a retread or the sequel you expected... guess again. I found just about all of it exciting, well made, and (as a huge Alien fan) a welcome bridge to the past. No, it's not in the same league as either Scott's or Cameron's original two films, and I do think "Prometheus" is superior, but "Alien:Covenant" is exactly the left field "anti-fan service" that any long-running franchise should welcome. It's not flawless, but it worked for me. Like it's precursor it's destined to be discussed and dissected for years to come. Pick a side.

Zzzzz. Watched under protest. I hate this type of movie.

When it was announced that Prometheus would would have Ridley Scott revisit the Alien world of his 1979 classic, there was much excitement and anticipation for him to revisiting the franchise that he originally created. However, the end result caused huge disappointment for fans and many were left wondering why Scott even bothered in the first place. Alien Covenant (the fifth film in the series) was a chance for Scott to right some wrongs and have another go but, unfortunately, he doesn't achieve that. If anything, Alien Covenant is an even bigger misstep. Plot: The crew of the deep-space colony vessel Covenant are bound for a remote planet to build a new life. En route they intercept a transmission from a nearby planet that may resemble Earth and decide to investigate. What they find is a dangerous world that they must escape as soon as they arrive. It has been said that Ridley Scott is on a collision course with his own creation - much in the same way that George Lucas did by delivering three unnecessary Star Wars prequels that were less than the sum of their parts. Scott's decision to claim that Prometheus wasn't actually part of the Alien storyline was such a confounding claim that it verged on being insulting by trying to pass it off as something that it obviously wasn't. That has seemingly all but been forgotten, though, as Alien Covenant makes no such claim. In fact, it's so much like previous Alien films in its structure that it becomes apparent very early on that there's no originality involved. Scott's original film hangs heavy over the proceedings and he has no shame in also stealing straight from James Cameron's sequel when it comes to action set-pieces; he even borrows from David Fincher's third instalment by showing us the occasional point of view of the alien itself. These approaches are glaring and despite trying to bring the best of these three films, Scott is unable to make them work or improve upon them at all. After a laborious first hour, it's apparent that Covenant is going nowhere fast and having an assorted cast of characters with little to no characterisation doesn't help matters (why James Franco even makes a cameo appearance is also pointless and off-putting). Much like Prometheus, the only saving grace is having Michael Fassbender - this time in a dual role - trying to hold this mess together. As good as he is, even he can't rise above the woefully lazy script and dreadful dialogue. The biggest problem for me, however, was the special effects. For a big-budget science fiction there really is no excuse for having such shamefully sub-par CGI. Scott manages to deliver an Alien film where the aliens themselves simply don't work. They are so laughably bad that they ruin any attempt at tension or suspense - the very bread and butter that Alien films thrive upon. There is one important piece of dialogue whereby Fassbender informs us that "One wrong note eventually ruins the entire symphony". This is where I can, at least, find some credence in Scott's latest misfire but it's wise words that he really should have paid more attention to. With the Blade Runner sequel due in a few months, I'm actually much happier now that Scott has decided to take a step back from his earlier masterpiece and pass the reigns to Denis Villenueve. Scott may be a visual master but his ability to provide overall quality anymore is seriously in question. It's fair to say that he has further plans for this franchise but after the disappointment of Prometheus and the ineptitude of this, it's a series of films that I'm finding it increasing more difficult to invest in. Mark Walker