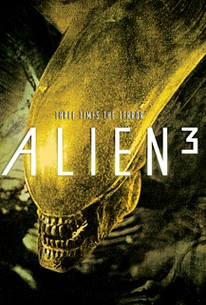 Experience a more visually stunning picture in this restored version of Alien3! Three-time Academy Award (R) nominee Sigourney Weaver returns in Alien3 as Officer Ripley, the sole survivor of the spaceship Nostromo's encounter with a deadly extraterrestrial in Alien, and subsequent victor over the Alien Queen after an epic battle in the cargo hold of the military transport ship Sulaco in Aliens. After escaping from the alien planet, the ship carrying Ripley crashes onto a remote and inhabited ore refinery. While living in the ore refinery until she is rescued by her employers, Ripley discovers the horrifying reason for her crash: an alien stowaway. As the alien matures and begins to kill off the inhabitants, Ripley discovers that her true enemy is more than just the killer alien. -- (C) Fox

There are no critic reviews yet for Alien3 (Special Edition). Keep checking Rotten Tomatoes for updates!

When an alien presence causes the Sulaco to eject the cryo tube chamber, it crash lands on a obscure technologically backward all-male prison colony. The third alien film was not particularly well received at the time, most citing David Fincher's inexperience as a feature director as prime culprit. It does on occasion resemble his music video heritage, but it also has some of the very stylish and atmospheric visuals that would become his trademark. It's true it does not measure up to the earlier films, but not much does. It has some interesting ideas, namely the evolution of a different kind of alien according to its specific host, and the fact that it will not attack an organism hosting an embryo. Sigourney Weaver is as always a strong and human protagonist while there is solid support from Charles S. Dutton who dominates the screen whenever he appears, but the best supporting character is Charles Dance's medical officer. Unfortunately he is disposed of too quickly and the last half of the film suffers for the fact. The effects have also fared worst of all the Alien films because of the early use of CGI and some studio butchery has left the middle section feeling incoherent and incomplete. The special edition rectifies this as the original plan to capture the alien makes a lot more sense and we see more of prisoner Gollic, but the pacing is not as tight and it it loses the alien birth/cremation scene which is probably the best in the entire film. As a whole, taken on its own merits, it is a stylish and well made sci-fi horror with a Gothic spin that deserved a fairer shake than it got.