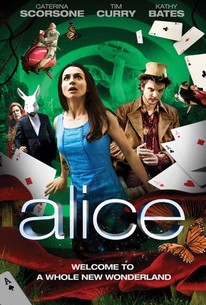 Director Nick Willing puts a new twist on Lewis Carroll's classic tale in this fantasy mini-series depicting Alice as a 21 year old women who ventures into Wonderland in search of a lost love. Almost immediately after presenting Alice (Catarina Scorsone) with an ornate family ring, handsome Jack Chase (Philip Winchester) is abducted by a pair of hulking brutes. Approached by a well-dressed man named White Rabbit (Alan Gray) who claims to know Jack's whereabouts, Alice follows the bearded stranger into a mirror and finds herself in a surreal new world of fantasy and wonder. When the Queen of Hearts (Kathy Bates) discovers her son bestowed a virtual stranger the ring that gives its owner power over the looking glass, it's up to Alice to determine what she should do with it. Harry Dean Stanton, Tim Curry, Matt Frewer, and Colm Meany co-star. ~ Jason Buchanan, Rovi

Kathy Bates
as Queen of Hearts

Colm Meaney
as King of Hearts

Zak Santiago
as 10 of Clubs

Alessandro Juliani
as 9 of Clubs

Eugene Lipinski
as Doctors Dee and Dum
View All

Caterina Scorsone plays Alice with a nice balance of determination, skepticism, and open-mindedness.

In pursuit of political correctness we get an Alice who beats up a knife-toting pirate after first warning him, "Don't even think about it, buddy!"

You're left with a woman whose main quest is unsuccessful, and a movie that's glum, long and devoid of any sense of wonder.

Once the situation is explained and we have met most of the major characters, the story becomes increasingly engaging.

If there's one thing you can count on SyFy for, it's cheesy made-for-TV movies and miniseries events that try to hide that cheese under several layers of affected darkness.

Despite these diversions and whiz-bang special effects, the movie drags at times.

It's been quite apparent for some time that the folks in Hollywood are out of new ideas and have to rehash the classics, but if you're going to do that, you should at least keep the elements that made the original so great in the first place.

More's the pity that it ends up feeling pointless and empty and humorless, for it starts off rather intriguing.

What ultimately sinks Alice is that it is too normal.

There are no featured audience reviews yet. Click the link below to see what others say about Alice!