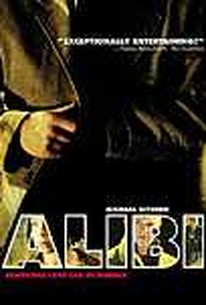 The psychological thriller Alibi stars Michael Kitchen as Greg Brentwood, who, as the story begins, throws a surprise party for his wife, Linda (Phyllis Logan). Marcey (Sophie Okonedo), a woman who worked for the catering outfit that supplied food for the party, goes back to the house after the party has ended to discover Greg standing over a dead body. He convinces Marcey that he had nothing to do with the person's death and to help him hide the body. As they attempt to get rid of the corpse, Marcey grows to have less and less faith in Greg's version of the events and begins to think she may be in danger. ~ Perry Seibert, Rovi

Be in at the beginning and sit tight.

The pairing of two unlikely characters in a game of subterfuge pays off, with Okonedo's uniqueness as fascinating as it is rewarding.

There are no featured audience reviews yet. Click the link below to see what others say about Alibi!