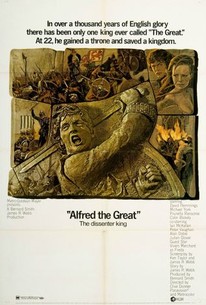 Alfred the Great (David Hemmings) changes his plans to becomes a priest and aspires to political greatness. When the invading Danes kidnap his wife Aelthswith (Prunella Ransome), he goes to battle to retrieve his queen and drive the enemy from England. She offers no resistance when King Guthrum (Michael York) desires her sexually, and she eventually gives birth to his child. Alfred the Great was one of England's most revered monarches and is considered the father of the British Navy. Spectacular battle scenes highlight this historical drama.

David Glaisyer
as Olaf
View All

Critic Reviews for Alfred the Great

There's a dejected feeling about this whole cinematic folly, as though somewhere along the way it had lost confidence even in its own anachronisms.

All I can say, if this is the true story of Alfred the Great, I'll be a monkey's uncle.

There are no featured reviews for Alfred the Great at this time.