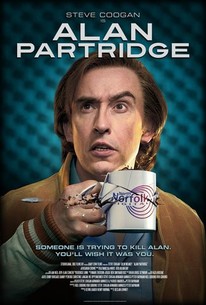 Critics Consensus: The Alan Partridge movie ditches the TV series' nuanced humor for something broader, and succeeds in presenting the character on a global scale.

Critics Consensus: The Alan Partridge movie ditches the TV series' nuanced humor for something broader, and succeeds in presenting the character on a global scale.

Critic Consensus: The Alan Partridge movie ditches the TV series' nuanced humor for something broader, and succeeds in presenting the character on a global scale.

Alan Partridge (Steve Coogan) has had many ups and downs in his life. National television broadcaster. Responsible for killing a guest on live TV. Local radio broadcaster. A nervous breakdown in Dundee. His self-published book, 'Bouncing Back', subsequently remaindered and pulped. ALAN PARTRIDGE finds Alan at the center of a siege, when a disgruntled fellow DJ (Colm Meaney) decides to hold their station hostage after learning that he's getting sacked by the new management. The character Alan Partridge first appeared over twenty years ago as a BBC sports reporter on the radio show, On The Hour. Since then, this wonderfully conceited, petty, anal, idiosyncratic comic creation has flourished across virtually every medium you can think of. He's been a sports reporter (again) on the seminal TV news spoof, The Day Today, host of his own TV chat show, Knowing Me, Knowing You, star of the fly-on-the-wall sitcom I'm Alan Partridge, and most recently Mid-Morning Matters..(C) Magnolia

Diane Morgan
as Girl in Crowd

Anna Stockton
as Paramedic
View All

"Alan Partridge" could have been an expansion of Coogan's original character concept into the international big time. Thankfully, it's not.

The movie clips along and pleases its fan base, and it'll amuse a lot of Partridge newbies as well.

Coogan is an old hand at the comedy of fear, envy, and bruised egotism, and the movie is packed with clever gags.

The way Alan feels on the outside is the way a lot of people feel at their most vulnerable. And so we watch him and recognize him, and then cringe and wish him luck.

After making a crackling good impression, Alan Partridge overstays its welcome to a harrowing extent.

It's a shame-Alan Partridge ain't it.

I love the character of Alan Partridge so much... He is a genius creation; just wrong enough and inappropriate enough and narcissistic enough to be comic, but never so wrong he's entirely unbelievable or unsympathetic.

While I found giggles in this misadventure, it's not a masterpiece I can unreservedly recommend, but there's certainly intelligence, humor and nudity to be found.

You don't need to be a fan of the show to find enjoyment out of this movie, which is endearing regardless of its overly simple plot and sometimes asinine sense of humor.

The joy of Partridge is his capacity for failure, but the only failure here is having cast him as a hero in a -- pause for laughter -- blockbuster with a flimsy script and a cul-de-sac of a premise that sees him backed into a corner.

Give Alan Partridge a chance, even if you've never heard of him before.

It's absolutely hilarious. A tremendously enjoyable comedy that's loaded with energy and huge laughs. It the funniest movie of 2014. A flat-out, fall-out of your seat comedy. I couldn't help but enjoy myself i loved it. Non-stop laughs and fun from start to finish. Steve Coogan is a comic genius, he gives one of his funniest performances ever. Coogan is a riot, he has so much energy and love for what he does and gives it all in every way. A knockout comedy classic. Ron Burgundy can eat his heart out.

Laugh out loud funny, over and over again. Please make a sequel.

When I first discovered the premise of Alan Partridge: Alpha Papa, which is the siege of the North Norfolk Digital building, I was concerned that, like many big screen adaptations, Alan Partridge was departing from its humble, unspectacular roots. By half way into the film, my concerns had unfortunately been confirmed. There are gun shots, fire-extinguishers to the face, explosions, armed policeman; it is by no means an action film, but since when was there such commotion in Alan's life? It was the desperate loneliness, alienation and banality of Alan's life in the original TV series that made audiences laugh and cringe while pitying and sometimes despising the pathetic central character. When I got home completely deflated after watching Alpha Papa, I reminded myself of just how good Alan could be by watching YouTube clips of the 1997 series. A single five minute scene of Alan attending a funeral captured the essence of the character. The dialogue is so rich, almost every line provided a laugh and I was cringing at Alan's complete and utter social ineptitude. Throughout the series you learn Alan's behaviour, it doesn't take one long to know when Alan has an agenda; he is so self-centred, immature and incredibly tactless that the viewer can read him like a book. It's both amusing and toe-curlingly embarrassing to see Alan converse with people and deal with his many problems. All of the subtlety and character study is missing in the film. Alan is no longer a sad-man, a complete liability. He's still cringe-worthy, particularly in scenes where he attempts to court a colleague, but none of the gags even scrape the surface of the programme's brilliance. The gags are really quite tired. They're predictable and rehashed, particularly scenes that initially appear melodramatic but are then abruptly interrupted by an action or one-liner like a needle scratching across vinyl. There's also a genre-aware armed stand-off scene towards the end where the characters have 'humourous', flippant exchanges despite the immediate danger in an 'In Bruges' fashion, only not funny. More than once I found myself sighing with disappointment and embarrassment at just how off-the-mark and rehashed the comedy was. Just like the film's premise, Coogan's performance is overblown, he needed to reel himself in. There would be flashes of classic Partridge, but generally both the dialogue and slapstick comedy just died. I commend Coogan's skill for miming perfectly to Roachford's 'Cuddly Toy'; however it just wasn't as funny as his air bass performance of Gary Numan's 'Music for Chameleons' in the second series. The two principal characters of the programme, Lynn, Alan's devoted and criminally underpaid secretary, and Michael, Alan's good natured friend, seldom appear in the film. These characters were crucial in the series as they revealed many facets of Alan's personality, exposing just how self-absorbed and manipulative he is whilst also showing how utterly dependent he is on their attention. We have the original team of Coogan and Iannucci, however it lacks almost every element that made the series so funny, eminently quotable and re-watchable. It shares very little in common with its televisual sibling, all Alpha Papa has is a caricature of a caricature and a thin, boring siege plot. www.hawkensian.com