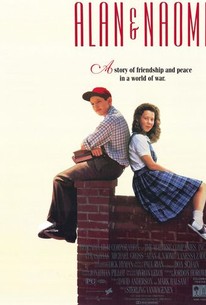 Alan is a typically streetwise Brooklyn teenager of the 1940s. Naomi is a French-Jewish refugee of Nazi oppression. Ever since witnessing the murder of her father, Naomi has remained in a catatonic state. Alan's well-meaning efforts seem useless at first, but eventually the boy's sincerity and compassion win out.

Blake A. Edwards
as Tommy Frankel

Critic Reviews for Alan and Naomi

As it moves forward, into hope and then back into terror, Alan & Naomi deepens and quickens. In many ways it is a simple and modest little picture, obliterating unthinkable horrors too easily.

Audience Reviews for Alan and Naomi

There are no featured audience reviews yet. Click the link below to see what others say about Alan and Naomi!