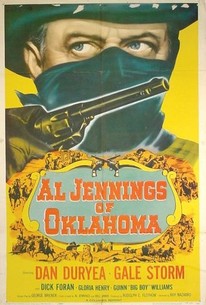 The real Al Jennings was a wizened little man who, after a largely unsuccessful career as a western outlaw, reformed to the extent of hitting the lecture circuit and even producing his own films. Jennings was still alive when Columbia's Al Jennings of Oklahoma was produced in 1951, so one can assume that he approved of the radical changes made in his life story and the casting of the better-looking Dan Duryea in the lead. The story begins with Al and his brother Frank (Dick Foran) trying to go straight, even though there's a $25,000 reward on their heads. Al's hopes for connubial bliss with Margo St. Clare (Gale Storm), who loves him despite his reputation, is shattered by the vengeful machinations of a railroad detective. Forced back into a life of crime, Jennings is captured and sentenced to life imprisonment--a sentence that, of course, was eventually modified. Al Jennings of Oklahoma is not one of the classic westerns, but it manages to hold one's attention throughout a plenitude of plot twists.

A busy B-Western that turns increasingly more ridiculous by the minute.

There are no featured reviews for Al Jennings of Oklahoma at this time.