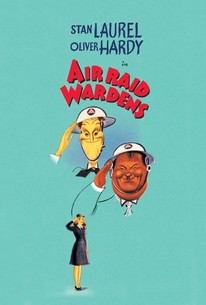 This war-themed comedy centers on the attempts of an incompetent duo, played by Laurel and Hardy, to participate in the war effort, only to find they aren't wanted. The situation worsens when they botch a job as air-raid wardens but ultimately redeem themselves by battling a spy ring.

Stan Laurel
as Himself

Oliver Hardy
as Himself

Subpar Laurel and Hardy comedy, as it lacks freshness and the material is too thin for a feature.