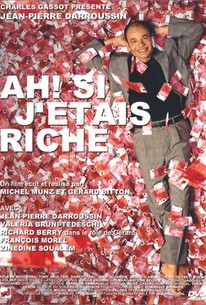 French filmmakers Gérard Bitton and Michel Munz write and direct the comedy Ah! Si j'etais Riche (If I Were a Rich Man). Salesman Aldo (Jean-Pierre Darroussin) is getting divorced from his wife Alice (Valeria Bruni Tedeschi). When he unexpectedly wins ten million euros in the lottery, he has to maintain the secret until the divorce is final. Though entitled to take half of his earnings, she's momentarily distracted by an affair with his boss, Gérard (Richard Berry). Co-writer/director Michel Munz also provides the original music.

There are no critic reviews yet for Ah! Si j'étais riche. Keep checking Rotten Tomatoes for updates!

There are no featured reviews for Ah! Si j'étais riche at this time.