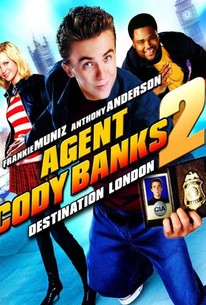 Fifteen-year-old CIA operative Cody Banks (played by Malcolm in the Middle star Frankie Muniz) is back in action in this comedy adventure, which sends the youthful secret agent to Old Blighty. Banks returns to Kamp Woody, the CIA training center disguised as a summer camp, where he's given a new partner, the bumbling but sharp-witted Derek (Anthony Anderson), and a new assignment, to track down a sinister double-agent who has made off with an experimental mind-control machine. The villain has made his way to Great Britain, so Banks is enrolled in an upscale private school in England, where he's forced to join the school band despite his lack of musical talent and finds himself working alongside Emily (Hannah Spearritt), a fellow teenage espionage agent. Keith David, Daniel Roebuck, and Cynthia Stevenson all return from the first film, while British filmmaker Kevin Allen takes over as director.

Sam Douglas
as US President

Leilah Isaac
as Sabeen on Bassoon

Theora Toumazi
as Sonya on Violin

Sammy Razack
as Percussion
View All

And Behold, a TomKitten is Born…
Fry & Serkis Sign Up to Be "Stormbreakers"
Frankie Muniz Aims to "Stay Alive"!

Really pretty hateful, shooting for the bulk of its laughs at the expense of those wacky foreign kids and the endlessly humiliated Anthony Anderson.

Kids should be reasonably diverted for a couple of hours, but odds are they'll have forgotten the whole thing by the next morning.

Here's just about everything a 6-year-old spy would hope to find in a kiddie-espionage flick, with just a twinge of romance, but nothing serious to interrupt Cody's undoubtedly continuing career.

Kids may well find the film diverting, but there's just not a lot of creativity or energy here.

You may be surprised at how not torturous [the film is].

The sequel's a caricatured and clichéd yawner. And the tone is all wrong.

Muniz manages to retain his wide-eyed, harried charm, but the film is really a shameful disservice to both him and the family audience which will no doubt turn out in droves to see it.

The only good I sense coming from this Cody Banks film is that it's so bad, we probably won't be seeing any more of them. Call me an optimistic; I live in hope.

A contender for worst film of the year.

Oh Frankie, how you can't act.

It was actually as good as the first film! Really good!

i would join a country club, coverse with the smug people who work there, watch 1 whole golf game without drinking all before i would watch something like Cody Banks. thank you.

I havent seen the first film but its enjoyable and fun