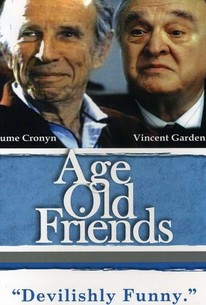 Hume Cronyn and Vincent Gardenia star as two retirement-home residents, longtime friends who possess wildly diverse temperaments. - John Cooper (Cronyn) is crotchety and physically frail, but his brain is sharp as a tack. Michael Aylott (Gardenia) is easygoing and in excellent health, but his mind is slowly deteriorating. The two men form an "us against the world" bond, which crumbles when Michael's memory further fails him and John is advised to move back in with his family. Adapted by Bob Larbey from his Broadway play +A Month of Sundays, Age Old Friends was first telecast over the HBO cable service on December 16, 1989.

Murray Westgate
as Colonel
View All

It's a universal theme, and nowadays a familiar one, but one rarely expressed as richly and compellingly.

A guided tour into the land of the long lived filled with poignant moments of humor, sadness, conflict, and revelation

There are no featured reviews for Age-Old Friends at this time.