The Age of Innocence1993 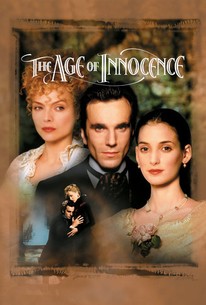 Critics Consensus: Equal measures romantic and wistful, Martin Scorsese's elegant adaptation of The Age of Innocence is a triumphant exercise in both stylistic and thematic restraint.

Critics Consensus: Equal measures romantic and wistful, Martin Scorsese's elegant adaptation of The Age of Innocence is a triumphant exercise in both stylistic and thematic restraint.

Critic Consensus: Equal measures romantic and wistful, Martin Scorsese's elegant adaptation of The Age of Innocence is a triumphant exercise in both stylistic and thematic restraint.

The Age of Innocence Videos

The Age of Innocence Photos

A ravishing romance about three wealthy New Yorkers caught in a tragic love triangle, the ironically-titled story chronicles the grandeur and hypocrisy of high society in the 1870s. At the center of the film is Newland Archer (Day-Lewis), an upstanding attorney who secretly longs for a more passionate life. Engaged to the lovely but ordinary socialite May Welland (Ryder), Newland resigns himself to a life of quiet complacency. But when May's unconventional cousin returns to New York amid social and sexual scandal, Newland risks everything for a chance at true love.

Winona Ryder
as May Welland

Kevin Sanders
as The Duke

Joanne Woodward
as Narrator, the narrator
View All

News & Interviews for The Age of Innocence

View All The Age of Innocence News

Critic Reviews for The Age of Innocence

A consistent spellbinder, laying bare its inhabitants' follies and furies with a tender touch and a vigilant quietude that accumulates into a grand force.

I don't know any of those [prior] versions, and I wonder how (which means I doubt that) they avoided the snare that Wharton unwittingly set for her adapters, the snare that, for all his gifts, caught Scorsese.

Manages to be both personal and true to its source, though it never quite comes together.

An extraordinarily sumptuous piece of filmmaking.

Mr. Scorsese has made a big, intelligent movie that functions as if it were a window on a world he had just discovered, and about which he can't wait to spread the news.

Scorsese never lets us forget he's an outsider looking in, tiptoeing through the material as if he's afraid of bumping the porcelain off the lacquered "oriental" end tables.

The Age of Innocence is vivid, even feverish, in its sensuous focus on detail.

Scorsese has altered the emotional balance of the story by casting his female leads so perversely-which increases the scope and intensity of the pathos.

Following Wharton's example, Scorsese accepts The Age of Innocence's flamboyantly wealthy and corrupt characters as they are without indulging in fashionably retrospective editorializing.

Audience Reviews for The Age of Innocence

A well-acted, if occasionally boring and long-winded study of 19th century New York and how a young upper-class man (Daniel Day-Lewis) slowly begins to detach himself from his wife (Winona Ryder) in hopes of starting a relationship with her cousin (Michelle Pfeiffer). If not for Day-Lewis's convincing, arresting turn as a man deeply troubled by what he should do and what he truly feels, this movie would probably be lost on me. Instead, it is quite good, in addition to Scorsese's firm direction which includes some original camera tricks to spice up the story every once in a while. It goes on a little too long, and sometimes you question if you should even be caring about these snobby upper-class people. However, the characters are given the proper color and depth they need, in addition to the plot being able to keep the story going in the second half, when you do not know what Day-Lewis's character will decide to do. The end result is a fine film, a minor entry into Scorsese's resume, and one of the few chances audiences around the world get to see the brilliance that is the actor Daniel Day-Lewis.

Of course, this film doesn't allow for the usual Scorsese violence, but coming from him, I expected something a little more...intense. The look of this movie is amazing, with its gorgeous cinematography, it's as if you are watching a 2-hour long painting. But, apart from the aesthetic aspect, it also resembles a painting in the fact that nothing happens. Sadly, The Age of Innocence is terribly boring. I never thought I'd see Daniel Day-Lewis in such a plain role, he did what he could with what he was given. Winona Ryder was good in her own, puppy-like way. The film's best was Michelle Pfeiffer. Her performance was flawed, but she was the one who kept your interest alive. Loved the narrator. Martin Scorsese should stick to what he does best: blood.

I'm okay with the movie because I liked the book. The direction is a bit odd. It seems like Marty Scorsese toned down his usual flashy cool to fit a staid period piece - the quick cuts to the food, the letters read to the camera.

I'm normally not into these types of movies, and I'll admit that the main reason I saw this was because it was directed by Scorsese. After watching it, I found myself enjoying it, like sincerely, and not just because of who made it. This is a really interesting and engaging film about a love triangle, the hypocrisy of high society, and the torment that can be caused by the conflict between desire and social restrictions. This may seem like the oddity of Scorsese's filmography, not least because of the PG rating and the fact that this was his first period piece costume drama, but thematically and stylistically, this film fits in quite nicely with the resty of his work. Among other trademarks are the Madonna-Whore complex (and other elements of Catholicism), psychological turmoil, a constantly moving camera, nicely executed tracking shots and long takes, wonderful cinematography and rapid yet fluid editing, among other things. I found myself a tad bit bored here and there, but I was mostly into the story, I cared about the dilemma the characters face, and the wonderfully poetic way it all comes together at the end. I thought the art direction and costumes were fabulous, the music great, and the fact that Scorsese took a risk by doing something different quite admirable. Despite no physocal violence in this film, Scorsese once commented that he felt this was his most violent film. That sounds laughable, but I get what he means. The pyschological and emotional violence is quite stinging and devastating here. I wouldn't call it his most violent film, but then again, emotional and psychological pain can be far more dmamging than trauma caused by knives, guns, fists, or blunt instruments. Give this one a chance. I don't quite think it is the perfect masterpiece that Roger Ebert does, but it is nonetheless a fascinating and brilliant romantic drama.

The Age of Innocence Quotes