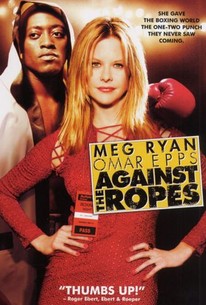 Against the Ropes Photos

Charles S. Dutton's feature-length directorial debut Against the Ropes is based on the real-life story of Jackie Kallen, a Jewish woman from Detroit who became a successful boxing manager. Played by Meg Ryan, Kallen works her way up in the world of boxing by believing in the fighting skills of Luther Shaw (Omar Epps). Director Dutton appears as veteran trainer Felix Reynolds, whom Kallen encourages to come out of retirement.

Hayley Verlyn
as Beauty With LaRocca

Tamara Hickey
as Megan the Reporter

Critic Reviews for Against the Ropes

This is pulpy, unforgivable stuff, as ungainly as Ryan's walk in her black high heels.

Meg Ryan is busily torpedoing any respect she might have accrued

This movie lacks any complexity. Dutton opts instead to embellish the story with boxing clichés.

A miscast Ryan struggles with a Detroit accent and a script that goes nowhere.

What could have been a Working Girl hoot gets mired in redundant assertions of Kallen's feistiness.

Somewhere along the way, I found myself enjoying Against the Ropes, not in spite of my better judgment, but because something in the movie defies the whole notion of better judgment altogether.

Kallen's story is interesting and I, quite frankly, expected something better than what we have. The raw materials are all here. They just need a little better management and promotion. Against the Ropes -- a split decision.

Based on a true story? Right. This is the boxing movie at its most sentimental -- and fake. Could be a contender for worst movie of the year.

An inoffensively average, formulaic entertainment with a marketing-problematic point of view.

It's hard to expect anyone to infuse much passion into a "by-the-numbers" boxing movie which telegraphs every punch.

Against the Ropes may not deliver a knock-out, but it does land some pretty good blows.

Audience Reviews for Against the Ropes

quite a hated movie! although it isnt original its not a terrible movie and is quite a good movie, it kept me entertained and interested in the movie and i thought it was pretty interesting. I enjoyed the story and its based on real events as well and i enjoyed the acting and writting of the script i think the movie showed how men are predujice and sexist when a women does a supposed male job that no women should do, and i think it projected that across brilliantly i really enjoyed the movie. Meg Ryan is brilliant and so is omar epps i love tony shalhoub in this hes brilliant as the horrible trainer businessman. Meg Ryan pays a women whose bossed about and finally gets the chances to take on a fighter for boxing but she takes a risk with an unsuspeciting surprise that turns to be a huge bonus, but will the fame get to her and will she continue to have the fighters best interests at heart? Funny in places and keeps you entertained and a real good emotional journey through the life of a women who gets everything good movie!

Interesting. Not original but it was okay.

Good bit comedy, but filled drama in fight film with my one of favourite beautiful actresses, Meg Ryan. Interesting inspired tale by the life of Jackie Kallen, the most successful female manager in the world of boxing.

Against the Ropes Quotes