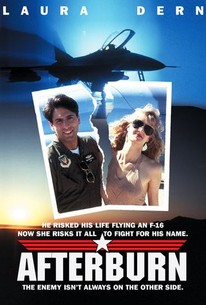 This riveting, fact-based made-for-cable drama follows the fight of Air Force widow Janet Harduvel to clear the name of her late husband, a pilot who died when his F-16 crashed. The official cause of the mishap was listed as "pilot error," but Harduvel refuses to believe this and so launches her own investigation. She soon discovers that the problem was with the plane itself and that the Air Force is trying very hard to conceal crucial facts. Despite the bureaucracy and obstacles, the determined widow continues fighting until she finds herself facing down a major military contractor, General Dynamics, in court.

This would have been a better film if the enemy had some credible personification, other than bumbling officers and sleazy lawyers.

There are no featured reviews for Afterburn at this time.